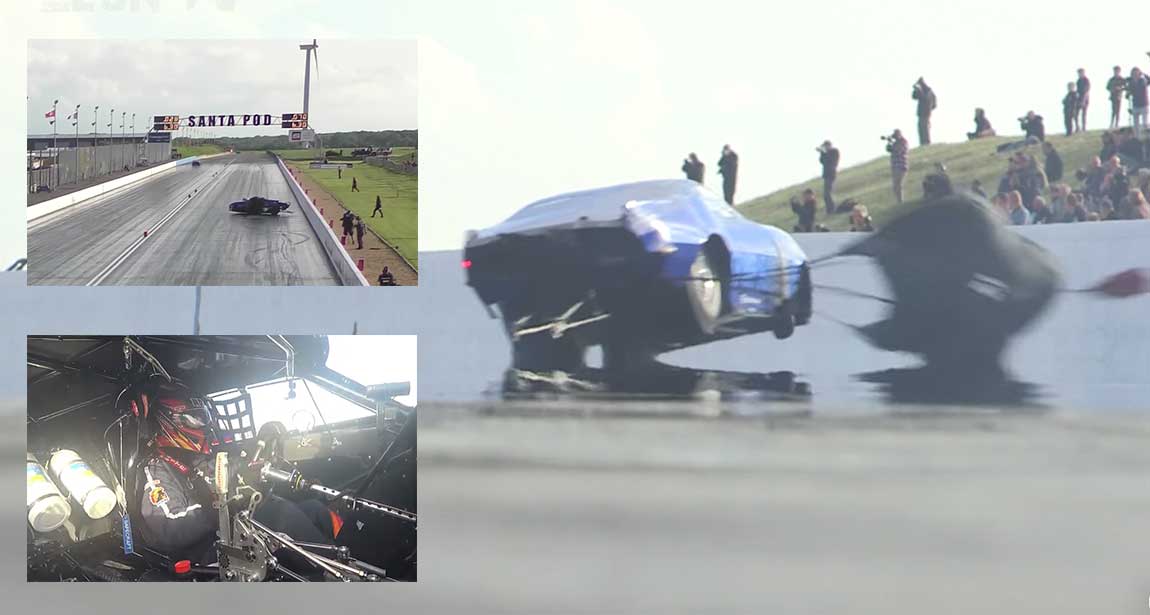 One of the biggest draws of a drag race is that anything can happen at any time. We never like to see a racer get tangled up in an uncomfortable situation when something like this happens. Sometimes, though, quick decisions have to be made on the spot. The entertainment factor here is real is we bite our nails and cheer for the driver to come out on the other side without being banged up.

This time, we follow along with Dmitry Samoruko at Santa Pod Raceway. On this pass, he heads down the racing surface and things take a dramatic turn, literally. Once underway, things start to unfold in a rather unsavory way. Straight out of the hole, the car is sliding sideways. This leaves Dmitry to pull out all of the stops and really tune in his driving ability.

The car twists turn and contorted in every which configuration as the driver struggles to get the machine away from the wall. Somehow, some way he’s able to do it. It almost made us dizzy just watching as the machine jerked back and forth. Every twist had us thinking that it wasn’t going to end well. We have to admit that there are at least half a dozen times during this pass where we were convinced that it wasn’t going to end in one piece. Luckily, in the end, we ended up being pleasantly surprised.

Check out the video below as the car comes mere inches from the wall before the driver is able to muscle the car back into the groove again. The video shows us the action from a variety of different angles. This certainly had to be one that got Samoruko’s adrenaline pumping hard! There aren’t too many passes that provide such a rollercoaster like this!

This was one impressive driving experience, to say the least!