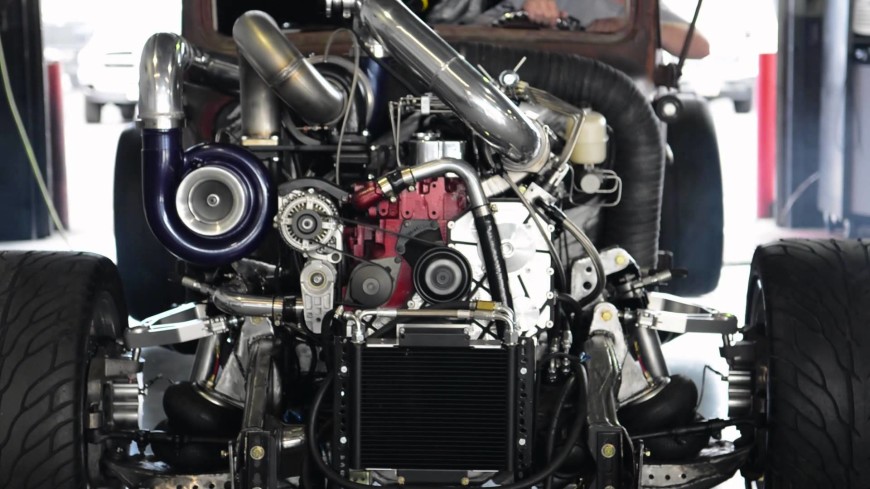 SEMA 2015 was full of crazy rides, but the Premier Performance Rat Rod with Cummins power and six Nitrous Express bottles in the bed was one of the craziest. That’s why this monster stole the #3 spot for our Top 10 rides of SEMA 2015. When you’re done reading this, keep scrolling down to see a killer video below with this rig on the dyno for the first time.

To talk about this ride, we first have to understand what a “rat rod” really is. It’s generally a hot rod that is in such crappy condition that it looks like it may not even drive. Rust and missing roofs are a common trend for them. The style is a bare bones approach to hot rodding that does not fit into what the general public would call “pretty.” Before getting into a rat rod you may want to get a tetanus shot to be on the safe side. When I first saw this truck, I didn’t think, “Look at that sick rat rod!” This truck made me feel warm and fuzzy inside since the first thing I saw were the fat turbos and wide tires. This is a rat rod, but it doesn’t make you feel the same as most rat rods. I blame the big turbos and the stupid wide modern tires at all four corners. It is an epic vehicle, but it doesn’t scream rat rod to me.

Premier decided to name the truck Six Pack. This isn’t like the Mopar Six Pack setup of old. The name is a reference to the six Nitrous Express bottles mounted on the bed. This unconventional mounting is one of the many head turning features of this thing. Premier wanted to get people’s attention and they did just that.

This monster was built by the diesel magicians at Industrial Injection for Premier Performance. It has a built 12v Cummins race motor with a compound turbos measuring 91mm and 71mm. On the motor alone, this thing can produce over 1,000hp at the wheels. Check out the video below to see them dyno it for the first time. It made 1,091hp at the wheels with the help of Nitrous Express during the first dyno, but they were in the SEMA crunch and didn’t have time to play with it more. They say it will easily make 1,300hp and around 3,000 lb-ft of torque once they get to play with it more and turn the boost up a bit.

Others than the turbos, one thing makes the truck stand out. The tires are big in the back, which fits the style, but they’re also the same width in the front. They are in your face and make you look twice. The wheels measure 20″ in diameter and 14″ wide all around but they look bigger than life without fenders to tuck them away in. A full air ride system gives it the proper stance along with 2.5″ shocks with remote reservoirs to control the frantic rear end.

This ride was definitely a must pick for our SEMA Top 10. Not many cars got close to the amount of looks this ride got. Kudos to the team at Industial Injection and props to Premier Products for being behind this radical build. Click HERE to see the rest of the SEMA Top 10 Picks!

« Semi-truck Taking a Shortcut in the middle of a river??