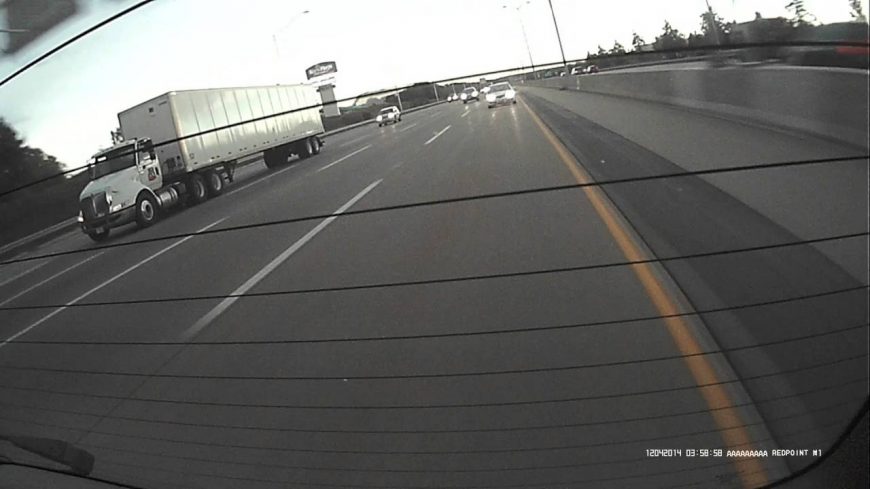 When you’re out and about on the roadways, it’s always a good idea to keep your head on a swivel, making sure that you see what’s happening all around you because you never know when another driver could act out in a way that might interfere with how you’re driving and put your safety in jeopardy. However, even if you’re 100% aware of what’s happening around you, there are some situations that just simply cannot be avoided. In this case, no matter how fast the reaction times of the drivers pictured here, they probably wouldn’t have had a chance to escape the grips of this semi truck.

As we watch from the rear facing dash cam of one of the cars on the highway that day, everything seemed to be going as according to plan as cars were traveling down the road in a very normal way, with nobody driving erratically or speeding or anything like that. However, if you watch the big rig all the way over toward the left-hand side of your screen, you will see something amazing and nerve-racking unfolding right in front of your eyes. Somehow, from the information that we picked up from this video, nobody died as this massive truck weighing tens of thousands of pounds plowed into the back of an entire row of cars, taking out what looks to be at least a half dozen machines if not more.

This is a miraculous situation to say the least. When you watch this for the first time and even the second time, your brain is telling you that somebody had to have passed away there but, luck was definitely on the side of the drivers in some capacity, given the circumstances that had already unfolded. It’s not clear if the driver just simply fell asleep at the wheel, if his brakes gave out, or some other circumstance unfolded but in any scenario, the carnage would remain the same.

« Aaron Kaufman Knocks The Webs Off His 1942 WLA and Teaches New Employee How to Ride!