Thanks to movies and television, when we hear the word tsunami, most of us imagine a ...

Thanks to movies and television, when we hear the word tsunami, most of us imagine a towering wall of water standing as tall as a skyscraper barreling into shore and knocking down buildings and creating a scene of epic destruction and death. While real-life tsunamis certainly do cause destruction and death, they’re much less physically imposing than Hollywood would have us believe. I know the first real exposure I had to an actual tsunami was back in 2004 when an earthquake in the Indian Ocean triggered a tsunami that would become the sixth-deadliest natural disaster in history when it struck Indonesia, Sri Lanka and India and several other countries bordering the Indian Ocean. An estimated quarter million people were killed across fourteen countries and the series of waves caused billions of dollars in damage.

Out at sea, a tsunami looks like little more than a solitary wave racing across the surface of the water. They can be so small they’re barely visible or they can be several meters high, and can cause problems for ships if they hit them from the side, but are generally harmless in the open water. As you can see in the video below, these waves aren’t exactly massive, but do clearly stand out against the relatively flat water around them.

The captain and crew of this ship almost certainly had been warned of the approaching wave and had time to position their vessel facing head-on into the wave, which gives the ship a smaller profile and allows it to plow into the wave in a more controlled manner than if the wave had struck the ship broadside.

As far as we can tell from this video, there was no damage to the ship, although once this wave made shore in Japan back in 2011, it caused widespread fatalities and damage, including causing severe structural damage to the Fukushima Daiichi Nuclear Power Plant.

Inside a Container Ship During a Massive Storm is Somewhere You Don't Want To Be! 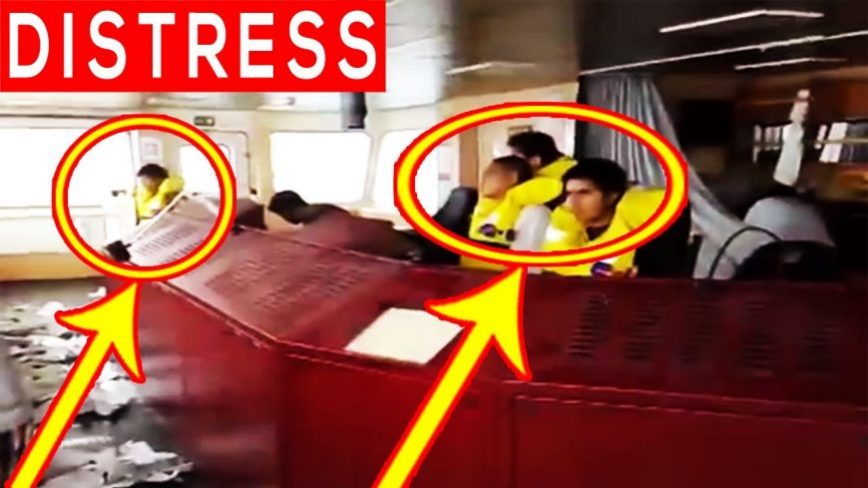