SLEEPER VW Golf Walks Away From Ford GT with Ease!

SLEEPER VW Golf Walks Away From Ford GT with Ease!

Folks, if you didn’t already know, allow us to educate you a little bit on the ...

Folks, if you didn’t already know, allow us to educate you a little bit on the idea that no matter what vehicle you have, you can make it go fast. Now, I think that it goes without saying that some vehicles are easier platforms to modify than others, however, with enough determination, creativity, and a little bit of loot, you can literally make anything on this planet beat anything else on wheels.

As it turns out, the platform in question here is none other than the Volkswagen Golf, a vehicle that not too many common folk would have a keen eye to know that it might be quick, however, if you’ve ever taken a stroll around the performance community, you might just know that once motorheads get their hands on these things, they have some pretty immense potential to get pretty nasty.

This time, we follow along with the Golf that is making quite an impression in the half mile as it hits the lanes in Dallas to attempt to make waves at WannaGoFast, taking everybody’s opinion on front wheel drive vehicles and completely shoving success in their faces, whether they like it or not.

This one had to take a lot of effort to be able to pull off as the owner says that he purchased it as a stock vehicle, however, with enough elbow grease, the car can be seen clocking in with consistent passes that top 170 mph, an impressive feat for even a vehicle that was created to be a performance-oriented machine, let alone one that was designed for fuel economy and picking up groceries.

If you follow along with the video below, you will be able to check out some Volkswagen madness that has this thing powering through the half mile to some really impressive passes. When all is said and done, the machine even gets it together enough to hustle away from the Almighty Ford GT. 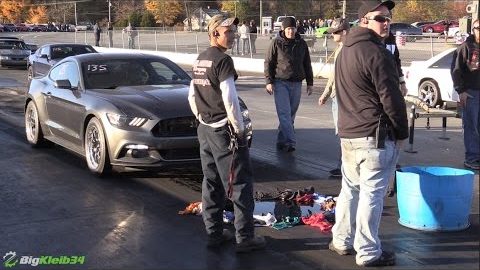