In the scheme of the ever-changing automotive landscape, we have some exciting new ...

In the scheme of the ever-changing automotive landscape, we have some exciting new innovations coming to the table these days. In 2019, obviously, the hot ticket seems to be electric cars. With Tesla leading the pack, electric vehicle innovation is at an all-time high. It really could lead us to an exciting time where driving a vehicle could be cheaper than ever.

As technology gets older and new tech comes out, everything ends up getting cheaper in the long run. When we thought that this was limited to things like televisions or music players, it also spans the automotive industry.

Combustion has been the only way of getting around as far as cars have existed. However, as electric makes its way into the mainstream, we can expect all forms of transportation to get a little bit cheaper and more efficient. Not only does this mean saving money but it also means saving the environment as a byproduct.

This time, we dive into another format of driving that hasn’t quite caught on. It really offers a lot of promise, though. With this release, we’re talking about solar.

The Lightyear One comes in at $170,000. That might seem like a steep price. However, when we look at the operating costs, it might just balance out. While the car is a traditional plug-in EV first, theoretically, the price to power this thing might get dangerously close to zero.

The machine is solar-powered after its plug-in capability. The solar panels on top provide energy to the vehicle. While they are slower to charge, operating at a rate of about 7.5 miles each hour, it’s hard to argue with free power. The vehicle offers 500 miles on one charge. This is more than 100 miles over Tesla’s top model.

Now, the thing to remember about cars like this is that they need to actually prove themselves. A lot of these concepts and newcomers come and go without being able to live up to the hype that they build for themselves. However, if the Lightyear one is half as awesome as it promises to be, we would expect to see it in driveways near you before long.

How to convert a Van in to an Off-Grid Camper in 17 Days! 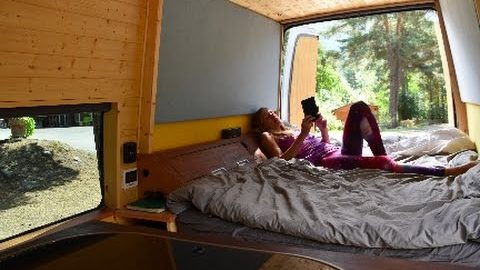