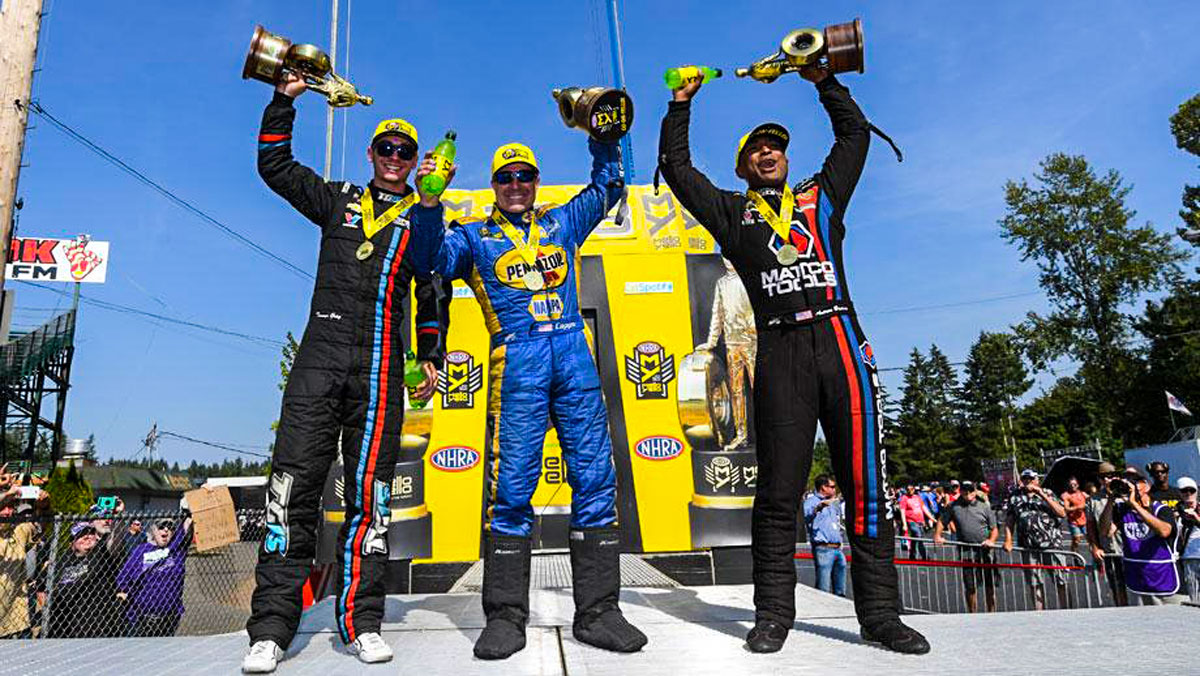 From top to bottom, the entire Speed Society Racing roster had weekends they would consider positive outings, including two class wins, a runner up and a number one qualifying effort.

In Top Fuel, it was an All-Speed Society final round as three time world champion Antron Brown took on two-time 2018 event winner Leah Pritchett in a battle of DSR teammates. In what will go down as one of the most memorable – as well as one of the closest – final rounds of the season, Brown overcame Pritchett’s holeshot to just nose her out at the finish line, taking the win by just 0.0047 of a second, or approximately 24”. Both cars made solid runs in the final, laying down nearly identical passes of 3.835 at 322 MPH for Antron to Leah’s 3.849 at 320 MPH. 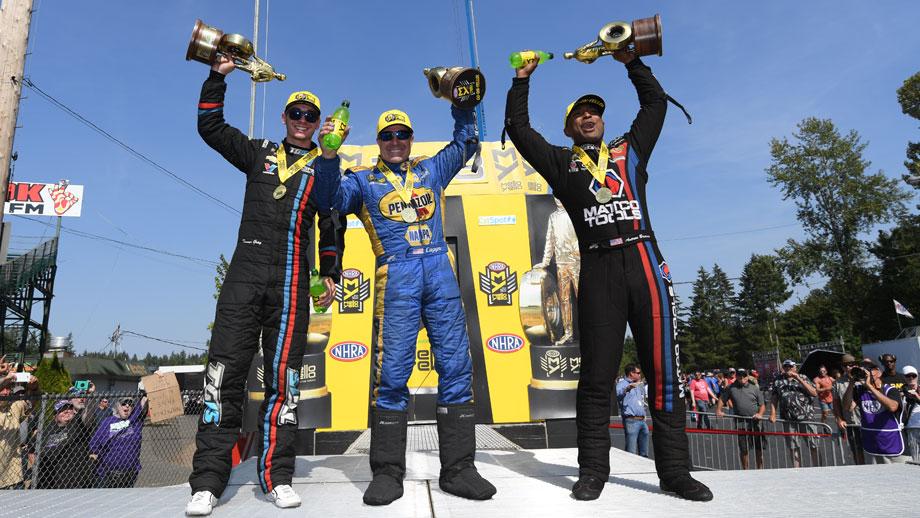 The win marked Antron’s 50th as a top fuel driver, making him the 7th driver in the NHRA’s nitro classes to eclipse the half-century milestone. The race also snapped a year-long winless drought for the Matco tools team, and extended Brown’s streak of seasons with at least one victory to a full decade. He’s currently the seventh-winningest driver in the professional driving ranks.

Funny Car driver Ron Capps started out the day by taking out Speed Society teammate Jonnie Lindberg in a great side by side race and ended the day by taking out current points leader Courtney Force in a great race as well. Capps won his 60th race behind the wheel of a nitro Funny Car with a 4.033 elapsed time at 314 MPH to take the win over a slowing Force, who ran 4.115 at only 255 MPH. Capps threw down a challenge to himself and his NAPA/Pennzoil team a few races back to close the gap on Force and go into the Countdown as the #1 driver in the class. They’ve made progress on that goal, closing the gap from over three hundred to just 154. That’s still a large margin to overcome, but Capps has been running strong since his win at Bristol.

Clay Millican and Alex Laughlin both had decent weekends, with Millican laying down solid numbers in qualifying and first round before hazing the tires against Pritchett in the quarterfinals. Pro Stock competitor Alex Laughlin battled gremlins in qualifying but ended up making the field solidly at #10, earning him yet another first round dance with reigning world champion Bo Butner. Despite holding a stellar 5-1 record against Butner, Laughlin came up just inches short, falling to Butner’s 6.601 elapsed time with a quicker-but-losing 6.593. The difference was Butner’s reaction time, a .042 to Laughlin’s .054, leaving just 0.0045 of a second – or 17 inches – between the cars at the stripe.

With one race left on the Western Swing, our guys are tired but motived, each of them hoping to close out the 4-race stretch with a win before heading back east for the US Nationals at the end of the month. Myself and Randy “Zebra” Pharr will be on hand at Indy to bring you all the action from our unique perspective, so be sure to check in for that!

« Police Investigate After Officer Points Gun at Driver During a Race