Reaper Wheels, Spikes Fitted to Create a “ATV of Doom” 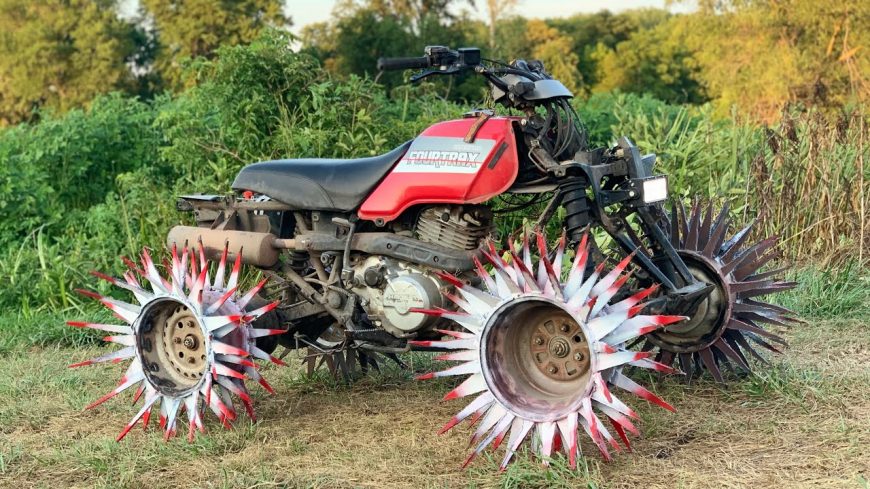 Sometimes, we can’t help be amazed and watch crazy projects that come together on YouTube. The platform has certainly spawned some ideas that we don’t think would’ve made their way to light otherwise. It seems as if, with an audience, some of these creators really go above and beyond. Obviously, the end goal is not only to get the most views possible but to also have a blast while doing it. For the guys over at WhistlinDiesel, that’s exactly what they have been up to.

We have seen this channel take part in all sorts of different wacky experiments. Most of them, though, as the name suggests, have been based around a diesel truck. This time, though, they take on the likes of an ATV. With this ATV, the crew creates a new set of wheels designed to, well, we will let you decide what they’re designed for.

The creation is dubbed the “Reaper Wheel” and makes this contraption as close to a death trap as we have ever seen. When all is said and done, curiosity can’t help but get the best of us. We have so we have to see how these wheels are going to react to the earth beneath them.

By following along with the video below, we get to see how this creation comes to life. We really had no idea what to expect here as the ATV trudged out into the wild. When all is said and done, we aren’t sure that any goal was really accomplished. However, we know that these guys had an absolutely great time. This is one that we will go ahead and file into the “Do not try at home” category.

« Diesel Trucks Rollin Coal On Cops Compilation – What were they Thinking?