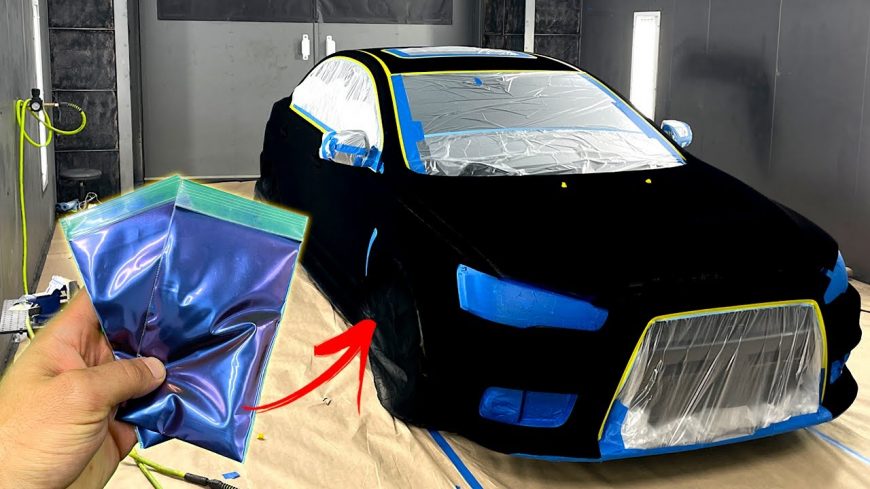 In the world of modifying cars, many enthusiasts approach it with the idea of trying to do something different. For many of us, our cars are like canvases that we wish to invest our creativity and ability into. We can kind of show off who we are with the car that we pick out and the way in which we choose to modify it.

Along the way, there are all sorts of different paths to go about doing this. On such a journey, most enthusiasts seem to want to locate something that would really make them stand out and have a vehicle that has all their own. At the end of the day, this can be kind of hard to do without some creativity or the willingness to spend good money. After all, pretty much everybody has access to the same parts catalogs.

This time, we check in with a “Paint job” of sorts that might just be the coolest we have ever seen. We aren’t even exaggerating when we tell you that this is unlike any other coating that has ever made its way to the surface of an automobile before. It would certainly be one way to make a vehicle all your own.

Previously, on the DipYourCar YouTube channel, we watched as they painted a car in something known as “Musou Black,” which is one of the darkest colors known to man. Unlike other colors, this absorbs the vast majority of light, meaning that it makes it hard to see the different angles on the body of the car.

Seeing this come to life was definitely cool but it is something that we have seen done before. However, when they decided to add another element to the equation, something entirely new was created. By sprinkling in what the company calls a “Hypershift,” the appearance was taken to an entirely new level. Essentially a Hypershift is a color flexing topcoat that might also contain metallic flake. In other words, it’s a transparent color sprayed on top of another color which allows the basecoat to be seen clearly.

Usually, though, this base coat isn’t the darkest substance known to man. When the two come together, it appears as if you’re glaring into the galaxy. The contrast between the anti-reflective coating and super reflective coating really presents something for the eyes to see.

Let’s just say that this paint job has a lot of character and the comment section of the video shows off a lot of people who really want to make it their own. Unfortunately, though, replicating this paint job in any sort of practical way is something that DipYourCar says isn’t possible just yet.