Generally speaking, when you hear of an officer being the guy who issues the most ...

Generally speaking, when you hear of an officer being the guy who issues the most citation or makes the most arrests, you immediately think he’s just a power-hungry jerk hiding behind his badge. That is, as sad as it is to say, often the case. However, this officer seems to be a little bit different, in that he actually seems to care about doing the right thing, not just running up his numbers to impress his superiors down at the precinct.

A month before this story aired, this officer had made his hundredth DWI arrest of the year, a number that some officers may never reach their entire career. When you see the emotion he displays after arresting the woman shown in the video below, you can kind of begin to understand just where the officer is coming from and why he takes his job so seriously.

The woman in question was stopped after reaching speeds of over 95 MPH on the freeway. As the officer approached the car, he noticed a little girl in the car without her seat belt on, another no-no that raised his suspicions even higher. Just a few moments later, the situation became much clearer after the driver began talking and trying to walk. Obviously intoxicated and incapable of safely operating her own feet, much less a car, the woman would be taken into custody for driving while intoxicated, a charge she literally admitted to on the video.

The little girl, the driver’s six year old niece, was most likely taken home safely, though we would imagine she won’t be getting back in the car with her aunt again. As the situation calms, the officer breaks down, knowing there’s a very good chance he saved lives on this particular night by doing his job the best he can.

Actor, Laurence Fishburne's, Daughter Gets Crazy During DUI Arrest Video! "I Have to Pee" 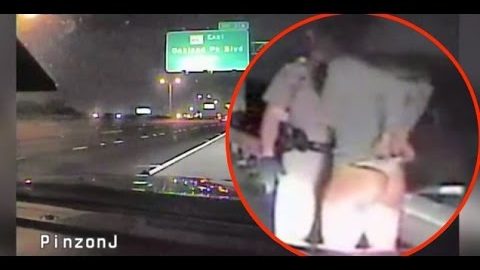