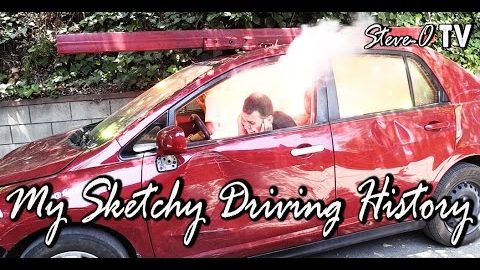 There are few people with histories more storied and sketchy than Jackass star and all-around goofball, Steve-O. Born Stephen Glover, the raspy-voiced Brit – yeah, we didn’t know he was British either – went on to graduate from the Ringling Brothers and Barnum & Bailey Clown College, though he was never a part of the touring circus himself. Instead he performed with a local circus in Fort Lauderdale, Florida and sent videos of himself to Jeff Tremaine, who would go on to direct Jackass. As soon as the show started to come together, Tremaine recruited Steve-O and the rest, as they say, was history.

Steve-O would go on to be a huge part of the Jackass franchise, pulling off cringe-worthy stunts in the movies and on the television series and it’s spinoff series, Wildboyz, in which he also starred along side Chris Pontius. He’s launched his own line of shoes, sold several comedy DVD’s and written a couple of books, as well as getting his life on track by ending his use of drugs and alcohol.

Two years ago today, a clean and sober Steve-O climbed a construction crane in LA to protest against Sea World. He was subsequently arrested for the stunt and sentenced to thirty days in jail, supposedly at his request, to raise more awareness of the cause against Sea World. He was take into custody in December of 2016 and served eight hours in jail before being released.

Throughout his life, driving hasn’t been much of a factor due to his use of drugs and alcohol, but he has had a couple of cars worth mentioning. He dives into the histories behind these cars in the video below, before pulling off one more stunt at the end that’s worth the price of admission. Go ahead and hit that play button and listen to Steve-O, in his own words, walk you through what he’s been through when it comes to driving.

« The Differences Between The Inline Four & Boxer Four Engines