You’ve heard it all your lives, but sometimes we just have be reminded that drugs are ...

You’ve heard it all your lives, but sometimes we just have be reminded that drugs are bad. Today, we have a very vivid look at the kinds of terrible decisions people make when they’re high.

This couple, both of whom appear to be long-time hardcore drug users, took a million dollar fire engine for a joyride in northern California. The male suspect spotted the truck while firefighters battled a grassfire and leapt at the opportunity to take the truck for a spin. Not only did this leave the firefighters without their truck, which carries their tools, hoses and water, but it triggered a multi-agency police chase that spanned five counties and nearly 100 miles.

Barreling down the road at speeds reaching 75 MPH at times, the two couple endangered the lives of anybody within reach of the massive fire engine as they drive at high speeds and reportedly crossed into oncoming traffic several times. Reports state the suspects took turns driving the massive emergency vehicle and even drove the truck a full half hour with a tire missing after police spike strips punctured the tire.

The male suspect said he was simply walking past the fire engine and noticed the door was open and “thought, Hollywood…” obviously recalling the many movies in which a firetruck is used to escape the police. In his interview, which was hard to follow and certainly reinforced the notion of drugs and/or alcohol playing a factor, the male suspect rambled aimlessly, although I have to say despite the gravity of the situation, his interview was pretty funny. The female suspect seemed somewhat more coherent and contrite, but appeared to be under the influence as well.

The pair will face multiple felony charges in the incident and will almost certainly face lengthy jail sentences if found guilty in court. 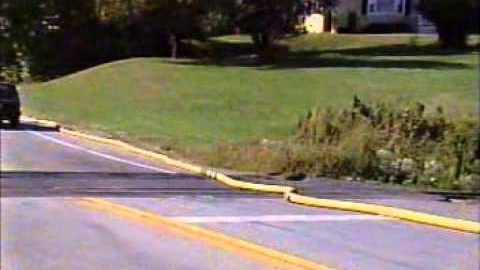