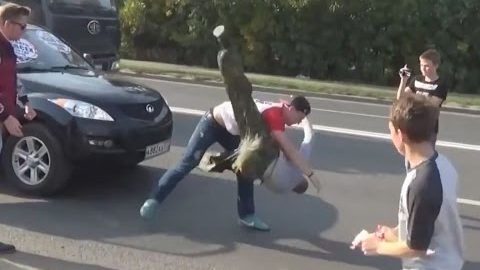 For some reason, there are some people who simply cannot stand sitting in traffic to the point where they’ll make some really stupid decisions to get around it. We get it, traffic is really freaking annoying and we would rather not take part in it either but on the same token, we are also considerate of our fellow driver and realize that our destination will still be there even if you are held up for five minutes or so.

This time, we catch up with a group of guys who has seen a trend in one particular spot of town where people will attempt to avoid a traffic jam by cutting off everyone else waiting in line through the use of a sidewalk. That’s right, they drive where people are supposed to walk so that they can save themselves a couple minutes.

How exactly does one go about preventing somebody from doing this? Well, the answer is simple. They head out and throw their bodies in the way of drivers who attempt to take the shortcut and explain to them why what they’re doing is wrong. If the drivers don’t oblige, they’ll receive a sizable sticker right in their line of sight. Some of the excuses that these people come up with are incredibly ridiculous and one guy even decides to try and pick a fight.

In this demonstration, these civilian traffic police use a little bit of force to take on those who simply do not know common courtesy. For some reason, the results of this video are incredibly satisfying as these inconsiderate offenders are put in their place.