Street Outlaws Big Chief vs Jerry Bird Battle it Out For $100,000 Last Night at Bristol Motor Speedway in TN

Street Outlaws Big Chief vs Jerry Bird Battle it Out For $100,000 Last Night at Bristol Motor Speedway in TN

Last night was the big race that everyone has been preparing for. All the baddest ...

Last night was the big race that everyone has been preparing for. All the baddest street outlaws from the show were at Bristol TN last night and everyone was gunning to win that 100k in cash! A huge payout race for the Discovery Channel tv show!

In the video below you will see Big Chief and Jerry Bird going at it in the final round. Big Chief took down long time nemesis and rival Kye Kelley in the 3rd round, a car he always seems to draw first round in swamp thing, and in the 4th round he drew Shane for the semifinals who crashed, and in the finals he beat 601’s the bird boys in the probe.

“What an amazing turnout at this episode taping of the Discovery Channel’s ‘Street Outlaws,’” said Jerry Caldwell, general manager of the Bristol Motor Speedway and Dragway. “We knew the show was tremendously popular. However, we didn’t anticipate a turnout this strong for a Tuesday night. It’s a testament to the show’s popularity, the power of social media engagement and the opportunity for fans to be a part of history.”

Caldwell apologized to fans who were not able to attend because the event reached capacity, Bristol seating capacity is 25,000. The turnout was clear on streets around Bristol Motor Speedway property. Activity on state Route 394 and U.S. Parkway 11E was at a halt as fans headed out to the dragway, which just charged individuals $10 for parking and a Free entry.

Street Outlaws Shane in the Blackbird Vega Crashes and Hits The Wall in Bristol TN! 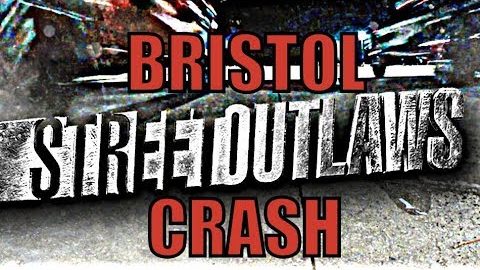