That Racing Channel caught up with a trio of total badasses from the outlaw drag ...

That Racing Channel caught up with a trio of total badasses from the outlaw drag racing world at Palm Beach International Raceway and got some great footage of the cars on the track, as well as some chats with the drivers.

The players are all names you’ve seen unless you’ve been living under a rock. Mike Murillo was on the property with his legendary Mustang known as LaFawnduh, James “Birdman” Finney brought out his wicked twin-turbo Trans Am and Street Outlaws New Orleans star Scott Taylor laid it down in his Cutlass known as John Doe. Murillo and Taylor faced off and had a great side by side race, with Murillo getting the win when Taylor had to pedal on the top end.

The cameras catch up with Mike in the pits and talk with him for a while about his car and the 3,500 horsepower big block Ford between the frame rails. The setup, which he’s been running since 2005, is turned down to around 2,500 horsepower since he’s been running No Prep events lately. Next the TRC crew chats with Taylor, who talks about his car being setup for No Prep as well, and how the unprepped surface evens out the playing field for his car versus cars like Murillo’s and Finney’s, who have a LOT more horsepower on tap than the nitrous-fed powerplant in John Doe.

Finally, they chat with Finney, who still makes time to talk to the cameras despite being elbow deep in repairs on his car. Finney talks boost numbers for various track conditions and then bolts everything back together and lays down a wicked test hit on the PBIR surface.

Thanks as always to the team at TRC for their awesome footage. These guys kill it every time and we always look forward to seeing what they have coming next! 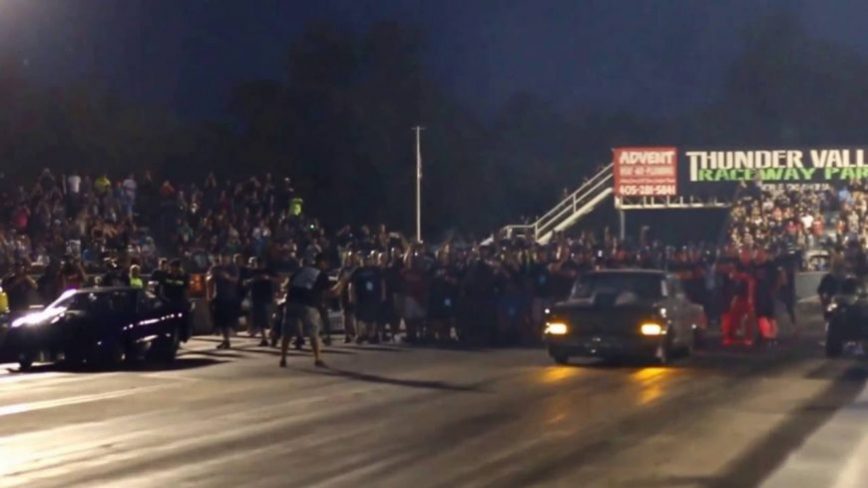