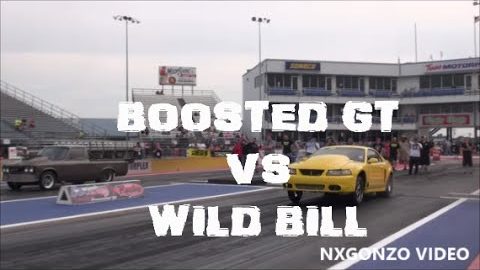 When it comes time to go to war at a no prep race, adrenaline really gets to flying every which way. The suspense is always at an all-time high in these things because you never really know what’s going to happen and when you’re watching the guys do their burnouts and line up at the starting line, in the next couple of seconds, all hell could break loose and it’s really a show for the spectators.

In this one, on center stage is none other than Street Outlaws’ Boosted GT as he lines up that screaming Ford Mustang against Wild Bill in the Chevy Luv pickup truck over in the right lane.  After shredding some rubber to make sure that their tires are nice and hot, the pair lines up and gets ready to go at one another in a battle of power and traction in which the best man will always win on a race to race basis.

Both cars rocket out of the hole hard but down the track some, it looks like Boosted ends up having a little bit of a traction issue. Would it be enough to give the win to the Luv? The only way to find out is to click play and check out all of the action captured in the NXgonzo Video that puts us trackside for this race.