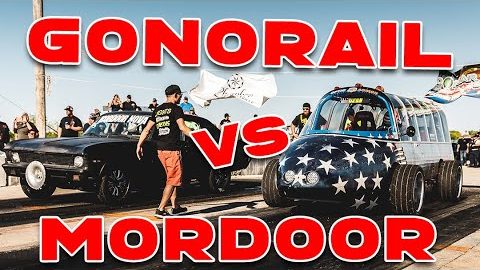 There are two types of enthusiasts that one might find at a drag race. One of these prefers building that which is common. These common builds definitely have an edge to them. Most of the time, they tend to be easier to put together. In turn, to the casual bystander, they will probably draw a little bit more attention as well. Well, that is before they’re put in motion.

On the other hand, we have the enthusiast who likes to do everything differently. A couple of folks we think fit very well into this category are the likes of Farmtruck and AZN. These two basically define “going off of the beaten path” when it comes to drag racing just about anything. Among the vehicles that we find them behind the wheel of, “conventional” isn’t really a word that would describe them.

In this outing, the crew brings out a couple of their cars to race one another. In one lane, we have a vehicle that was designed to be a parody of one of their Street Outlaws competitors. The “Mordoor Nova” is essentially a knock off of “Murder Nova,” one of the popular cars from the show. One big difference is that the car was built off of a four-door Chevrolet Nova and instead of the coupe.

In the other lane, we have the duo’s creation that’s known as the “Gonorail.”

Let’s just say that this ride is unlike pretty much anything that anybody has ever seen before. These guys took unconventional and really brought it to a new high in the drag racing community. These are the kind of fun builds that keep the dynamic duo so popular with fans.

By following along with the video below, we watch as the pair of Farmtruck and AZN brain children go at one another. We never like to have to pick a favorite child. After this one, though, it looks like they might just have to!