While the show has taken over the #1 spot on Monday nights for all programs that ...

While the show has taken over the #1 spot on Monday nights for all programs that aren’t Monday Night Football, there’s one big problem a lot of fans have with Discovery Channel’s Street Outlaws, especially the diehard gearheads that watch the show. We know these cars are capable of covering the 1/8th mile in just a matter of seconds, most of them right around 5 seconds, give or take a tenth or two. However, the show’s editors seem hell-bent on making each race seem so much longer than it has to be, splicing together different angles to make the races fill up 15 seconds or so of airtime.

While I can certainly appreciate the dramatic flair the multiple-angles add, the NHRA manages to use 2, sometimes 3 angles during a 3.7 second Top Fuel pass without making it seem any longer, so it’s not like it can’t be done. It doesn’t seem like they’re willing to change their editing style during the show, but at least they did start including some “Ride along” footage featuring what the multiple GoPro cameras on the cars capture in real time, giving viewers a look at just how quick these races go down.

Alternatively, there’s often footage taken at the starting line that shows the races from there in real time too, such as this clip taken from just behind the Farmtruck and Shane in the Blackbird Vega. Just watching their taillights fade quickly into the distance, you get a real feel for just how powerful these rides are. Even the Farmtruck, which is heavy and still driven regularly on the street, has no problem lifting the front wheels when Chief hits the light, actually jumping out on Shane, though it does look like the ProCharged Vega did drive around him on the top end. Either way, this is a great way to appreciate just how quick these rides are and how quickly the races actually go down. 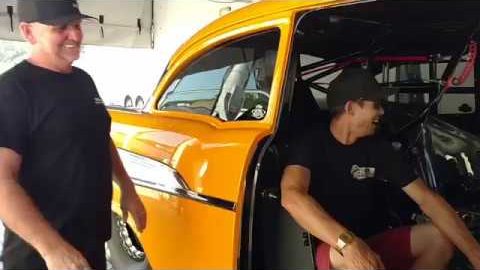