Street Outlaws JJ Da Boss And The Memphis Crew Testing On the Street! 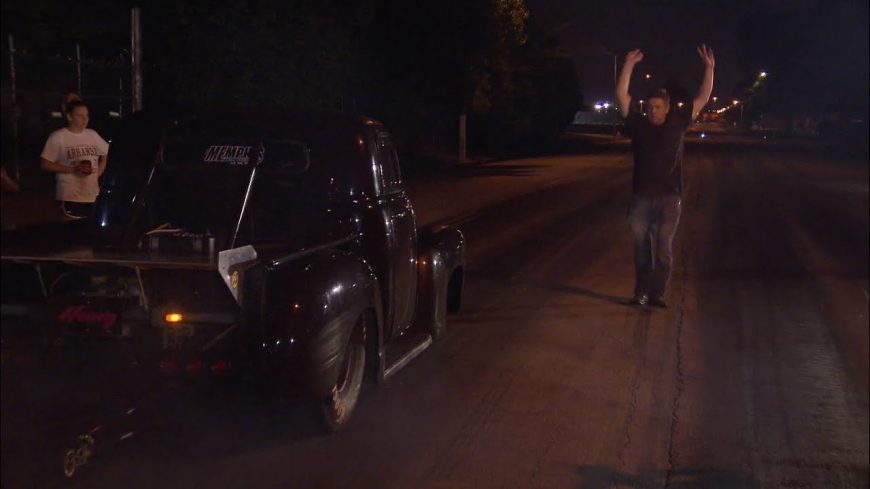 Yesterday, we brought you a sneak peek of Street Outlaws star Dominator doing some testing on the streets of Memphis in preparation for an upcoming showdown with JJ Da Boss and the 901 crew. With Monza and Daddy Dave on hand helping line out his car, Dominator made a solid launch but struck the tires a ways down the street.

In this clip, we see things from the opposing team’s perspective as JJ and his guys are putting in some work testing on the streets of Memphis to get their cars ready for the bug throw down with the 405. Jamie Otts opens up the session with laying down a solid looking run in his Taxi Cab style ’55 Chevy. After laying down a beautiful burnout, Otts turns loose the big-inch nitrous motor under the hood and plants the rear tires hard, streaking down the street with a killer pass.

Up next, JJ’s beloved pickup truck known as Ol’ Heavy lays down its own fresh patch of rubber with a big smoky burnout, then backs up to the line to make a hit. It’s hard to say for sure, but those look an awful lot like a big tire under Ol’ Heavy’s shapely rear fenders, possibly indicating a change in tactics for JJ, who usually has the truck on small tires in seasons past. Don’t quote me on that as 100% accurate though because we don’t get a really good look at the tire from behind, the easiest angle to distinguish big tires from small.

The trick hits the tire just as hard as always, pitching the nose high into the air, but a quick pedal job keeps things under control and returns the nose to earth beautifully as the driver wheels the truck down the street. You see JJ and the crew celebrating after both passes, indicating that they are happy with the results and ready for the challenge coming from the 405. It remains to be seen who will come out on top, but you can bet the battle will be one to watching on the upcoming season of Street Outlaws.

Street Outlaws JJ Da Boss And The Memphis Crew Testing On the Street!