Street Outlaws Kamikaze Chris in the El Camino vs Birdman!

Street Outlaws Kamikaze Chris in the El Camino vs Birdman!

In the scheme of drag racing, there are thousands of people out there who are all ...

In the scheme of drag racing, there are thousands of people out there who are all looking to make it to the top and gain that position in the spotlight that really has their ride on a pedestal. While most aren’t able to climb up in the limelight, there are some racers who have managed to pound away enough in their career that their machines have become rightly recognized by the entire community and this time, we get the chance to watch a couple of those very machines go at one another. Out there on the no prep surface, these cars are really a force to be reckoned with and this time, we see what happens when Kamikaze Chris and Birdman go head to head.

The action comes at us from Outlaw Armageddon as these two get ready to tackle the surface at hand with each boasting their own impressive bag of accomplishments to go along for the ride. Straight from the start, we have to admit that we were pretty excited to see how the outcome of this one would unfold on the strip because if you know where the drivers have come from and how they’ve built their reputations on streets and strips across the country, you would be too! The only thing to do now is to get down to the action and watch these two insane machines rip off of the flashlight start.

Check out the footage down below that puts you in the hot seat, letting you see the action as close as you can possibly get to watching these men go to war. If you want to talk about racing where just about anything can happen at any time, heading down to a no prep series is definitely somewhere that you want to be. You never know who’s going to take home victory and when all hell is going to be unleashed. 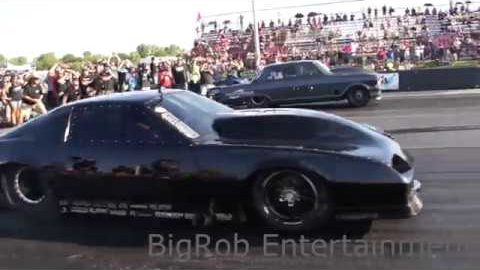