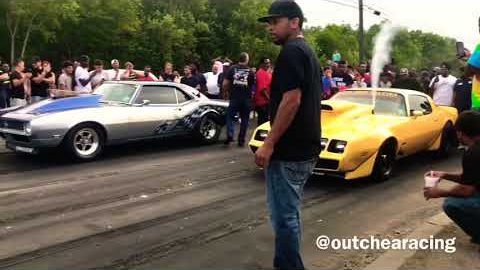 When you head out to watch racing in just about any capacity, you have to be ready for a worst case scenario to unfold. No matter what kind of racing, there’s a chance that something bad is going to happen but if you’re on your toes instead of on your heels, there’s a better chance you’ll be able to get out of the way. This chance of something sketchy happening is even more prevalent in a street racing scenario. In normal drag racing, the track will have a prepared surface with all sorts of stickiness sprayed down to keep the cars nice and glued to the racing surface, however, to the contrary, on the streets, the surfaces aren’t prepared at all which can call for quite the volatile situation.

In this one, we head out to one of the most popular street racing spots around in “Da Pad” that has a Chevrolet Camaro going head-to-head with a nitrous spitting Pontiac Trans Am. Both of these cars look like they’re ready to go to battle and with drivers who are pushing ahead for what we would presume to be either cash or at least bragging rights, you can bet that the result out there could get a little bit squirrley and send one or more of these machines going on wild ride.

As the action unfolds, it just so happens to be the Pontiac that is losing control and going on quite the journey as it ends up getting out a little bit before the rear end kicks loose, sending the car for the sidelines where both people and other vehicles sit. From there, all that the driver can do is the best that he can to bring this thing back under control again in trying to cause the minimum amount of damage and it really looks like he did a good job of doing just that, how, we’re not exactly sure.

Check out the video down below but be sure to stay on your toes because this one is going to get pretty wild and crazy. This just goes to show you that you really never know what’s going to happen out there during the race and this time, looks like several parties involved really got lucky that no big-time damage unfolded.