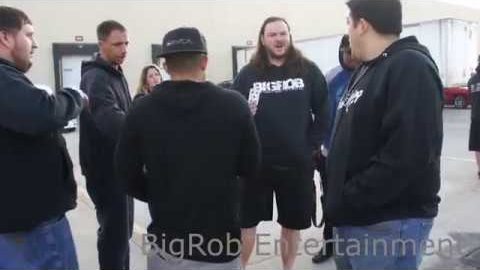 We’ve seen Big Rob in action before on the streets, and although we’re used to his awesome work behind the camera, this time he’s actually pulling double duty, recording the action and racing in the same event. Along with Rob, there’s a couple of other cars and faces you may recognize. For this event, the big tire cars are locked away in the shop and the real street cars come out to play. And yes, before you start ripping me to shreds on Facebook, I do see that the blue Mustang is on a trailer. The car itself is pretty streetable, the trailer is more a precaution in case of parts breakage.

The action starts with a driver’s meeting, where the racemaster goes over the rules and the drivers draw cards to see who has to run each other, then it’s off to first round, where the action is surprisingly good! Each of the races in round one is a great, close race, which is exactly what you want in race like this.

The cops show up just before the round ends, so the action moves to another spot, where the first round is completed. Another draw takes place to see who of the remaining 5 cars have to race each other and who gets the bye. Our cameraman Rob draws the odd card out and gets the bye into the semifinal round. The other two races go down and Rob’s day comes to an end at the hands of Slow White, another 4th Gen Camaro, setting up a Ford versus Chevy final against Da Cream Machine, the aforementioned Blue Mustang.

It looks like a great heads up race in the final but something lets go in Slow White, with an audible pop banging out of the rear of the car as it slows while Da Cream Machine streaks across the stripe to take the win.

When the racing concludes, there’s a couple of grudge races lined up to end the day’s festivities. As always, Rob captured all the action, though we aren’t sure who manned the camera while he was driving. Maybe his camera is so well trained it just knows what to do on it’s own?!