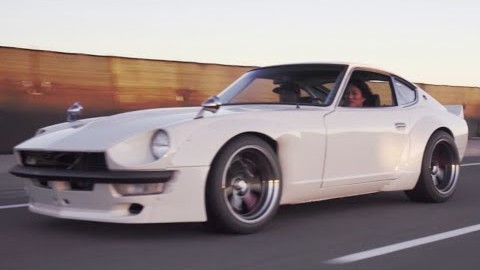 The Fast & Furious series has become a staple in the automotive community. Even though many scenes are exaggerated and the story line is sometimes overdone, we love it. You may tell people, “The series has been junk since the second movie!” but you will still go watch Fast 8 when it comes out in early 2017… One of the main characters throughout the movies is Han Lue, played by Sung Kang. Kang recently took on a ’73 240Z project with two friends and the team at GReddy. The plan was to build a top notch car capable of going to the track on the weekend, but still be fun to drive in normal conditions. While the finished product was a large goal, the real point of the build was to build new friendships and enjoy time with old friends.

The car made it to SEMA 2015 by the skin of its teeth and it turned out unbelievable. The neutral color combo with a tasteful Rocket Bunny kit and Volk wheels just looks awesome. I can’t imagine building a 240z any other way. I’m a domestic car guy, but I love some of these old Datto’s. They took the car and put a JDM flare on the new American style of “ProTouring” or “Restomod” as some call it. They used new suspension, new brakes and a fresh RB26 to turn the old Z into a real performer.

Kang’s name for this car is FuguZ. As he says in the first episode of the Z Dream video series, “The Fugu fish is a blowfish and if you do not properly prepare it, it can kill you. Just like a race car, if it’s not properly prepared once you’re on the track, it can kill you.” said Kang. “The whole idea of the FuguZ is to inspire friends to get together and build something together.”

The car isn’t just a race car to Kang. It is a product of his friendship and partnership with the team at GReddy. The FuguZ symbolizes what the whole car culture is about. You take the time to have out with your friends and build something greater than you could have alone. Building a car in your shop by yourself over years is not as wholesome or as much fun as spending quality time with friends and making something extraordinary. The Z is definitely an awesome car and worthy of the #4 pick, but the story behind it is what attracted me to this car more than anything. Click HERE to view the rest of the SEMA Top 10 picks!

Check out the video below to see the car as they finished it and hear that 10,000rpm RB26 rip.