Supra Gets Hemi Swap to Push the Limits Even Further! 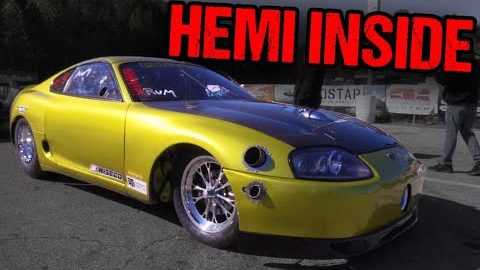 In the world of import racing, there are a few things that we can take to the bank. One of those concepts would just so happen to be that the Toyota 2JZ is a cornerstone of the community. Most popularly found in the MKIV Supra, the engine has been tuned to the moon. It’s incredible that it has been around since the early 90s and still finds a way to be competitive.

However, just like every other combination, the platform has its limits. Exactly where those limits reside depends on who we ask. Beauty is in the eye of the beholder in situations like this, after all.

The folks over at ProSpeed Autosports in Houston, TX are rather familiar with the platform. After all, their 2J powered Nissan 240sx known as “White Rice” did break a couple of records. Just to name one, it was the first-ever import to reach a 6-second quarter-mile on a drag radial tire. The car was said to make over 2000 hp. With that in mind, they wanted to push their limits even further. It turned out that doing that would entail a different platform to stay reliable.

This time, the shop is turning heads with a Toyota Supra by the name of “Wasabi.”

Unlike a conventional Supra, Wasabi isn’t powered by six cylinders of fury. Instead, it features a Brad Anderson Hemi and Mark Micke Turbo 400. It’s all topped off with a single Precision 118mm turbo and Motec to control everything. When it all comes together, it’s a sight to be seen! We’re told that the power figure amounts to an incredible 2800 hp without fail.

It might take a moment to get used to the growl of a V8 coming from this generation Supra. When we do, though, it’s game on! This thing is hard to resist and we just had to sink our teeth into it!

Catch if for yourself by following along with the BigKleib34 video below. All of the action takes place at the Import vs Domestic World Cup Finals!