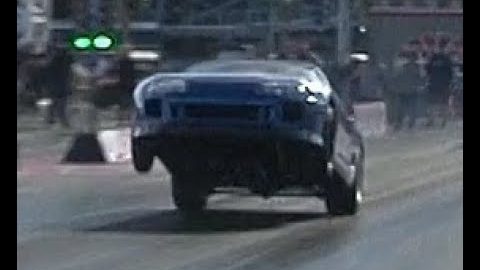 Back in the fall, I made my first trip to Vegas for the Street Car Super Nationals. While the culture shock of Sin City was a lot to take in for this Alabama boy, once we got out of the city and onto the property at The Strip and Las Vegas Motor Speedway felt a lot more like home, especially with cars like this Supra showing out all weekend!

Our friend and partner Hans from Free Life Films caught Dana Westover in the Virtual Works Racing Supra doing his best airplane impression and launching the nose high into the air several times. The gorgeous blue MKIV is, of course, powered by the vaunted 2JZ powerplant that made the Supra one of the most sought-after cars ever built, and cranks out over 1,000 horsepower, so it should be no surprise to see the car leaving with the front wheels in the air.

Free Life Footage is such good quality you can easily see how the pulls the tires at the release of the transbrake, then begins a rapid ascent when the boost comes in off the starting line. It’s almost like a two-stage wheelie, followed by a rapid descent as Westover has to abort to keep the car from dragging the rear bumper. The nose hit the ground hard following the wheelstands, but Westover lucked out as the oil pan didn’t hit the track and make a mess.

I’m not sure if there’s a solution to keeping the nose down other than hanging weight out front or trying to turn the boost down a bit until farther downtrack, because the class rules don’t allow wheelie bars, so maybe they can find the balance of weight and tweaking the tune to keep the nose pointed downtrack instead of at the sky and they can unleash the horsepower for the full 1/8th mile.

Or maybe they won’t figure it out and they’ll be the star of the show with more giant wheelstands! Either way works for me!

« Youtuber Gives 3 Reasons Why Toyota SHOULD NOT Revive the Supra!