After Smashing Through The Barrier, SUV Jumps A Drawbridge! This Isn’t the First Time…

After Smashing Through The Barrier, SUV Jumps A Drawbridge! This Isn’t the First Time…

There are a couple of different Hollywood movies that showcase drivers who have the ...

There are a couple of different Hollywood movies that showcase drivers who have the ability to jump over a drawbridge. The one that really strikes a chord with me personally is 2 Fast 2 Furious but others might remember the drawbridge jump scene from The Blues Brothers a little bit more fondly.

Even though Hollywood has a way of making it look incredibly believable, a stunt like this is just something that we wouldn’t try out. Even if the drawbridge is barely open, there’s a pretty good chance that the vehicle making the jump will be highly damaged and the chance of injury also skyrockets. The higher the bridge rises, naturally, the worse things will likely get.

With that said, a couple of situations have popped up in the news that have shown individuals behind the wheel successfully completing such stunts. We aren’t quite sure if these individuals behind the wheel just simply lost focus for a moment and ended up launching over the drawbridge or if they wanted to beat the bridge for a little bit of a thrill. In any case, though, the footage is pretty crazy to watch.

The latest incident comes from the Main Street Bridge that crosses over the Halifax River near Daytona Beach. Police say that a grayish-colored SUV jumped the open bridge after breaking through the traffic arm just before 8 o’clock on Monday morning.

It does appear as if the vehicle was damaged in the incident but it also landed on all fours and was able to drive away as the bridge was not opened that much. Police are still searching for the person behind the wheel, as far as we know.

In the meantime, we would probably recommend not trying out something like this for yourself, if you can help it!

The footage below shows a separate incident from the same bridge involving a motorcycle.

This is the Main Street draw bridge. The Bike Week “shenanigans” have officially commenced! Folks, please be safe and be smarter than this guy! pic.twitter.com/KGBuPDQfw9

Chevy Suburban Goes Full Dukes Of Hazzard And Jumps Over A BRIDGE! 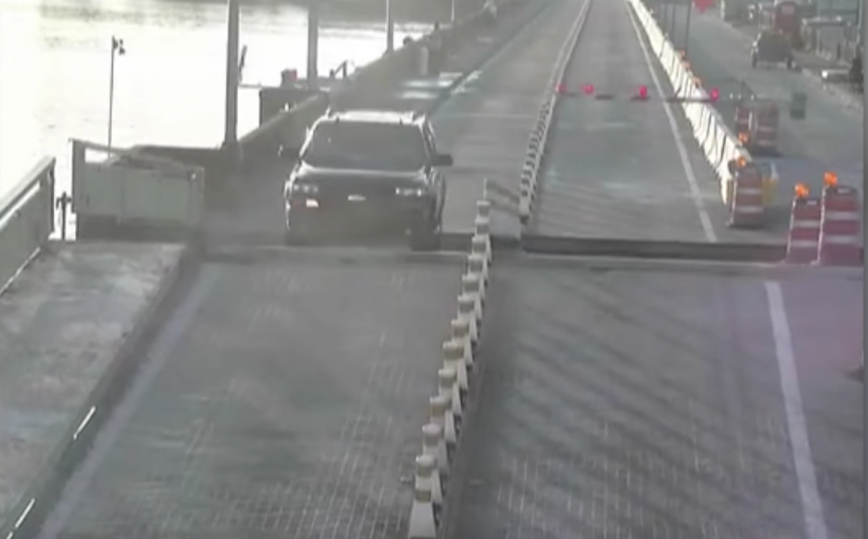