Take A Slow Motion Look Inside An Internal Combustion Engine

Take A Slow Motion Look Inside An Internal Combustion Engine

We’ve seen quite a few videos featuring engines running with transparent heads, allowing a view of what goes on inside an internal combustion engine. However, when you combine that with a high-speed camera, that’s when things really get interesting. Not only does our host slow things down in ridiculously beautiful slow motion, but we get to see him trying out three different types of fuel, each of which burns drastically differently.

We start off with your run of the mill gasoline, the standard by with other fuels are measured. As you can see, pump gas burns pretty consistently and evenly across the combustion chamber, which is exactly why it’s the most common fuel in the world, at least as far as internal combustion engines go. That consistency and predictability is what automakers rely on when building engines that are expected to last for hundreds of thousands of miles.

Up next, our host fills the tank with rubbing alcohol. I knew that rubbing alcohol was flammable – something I hope everybody out there knows – but I wasn’t sure if it would work for fuel, and after this video, I’m honestly still not positive its actually a viable fuel for a car. It does ignite and it does burn well enough to keep the engine running, but you can see how much-unburned fuel is left in the combustion chamber after each cycle of the engine, so it seems likely that in a car engine, this much-unburned fuel would be problematic, especially if it is pushed out of the exhaust valve and hits the 02 sensors in the exhaust. However, as I said, it does burn well enough to keep the engine running, so if you’re mowing the grass and have a few strips left and run out of gasoline, alcohol just might let the finish the job.

Finally, our hose tries something truly exciting: acetylene. If you don’t know, acetylene is a gas used in welding that burns at an extremely high temperature, making it ideal for melting metal. However, as you can see, that extreme temperature will also work for powering an engine, but it does damage the clear head to the point it likely will have to be scrapped.

High-speed video is always fun, especially when you involve flames and spark plugs. We are always on the lookout for cool videos like this to share with you guys! 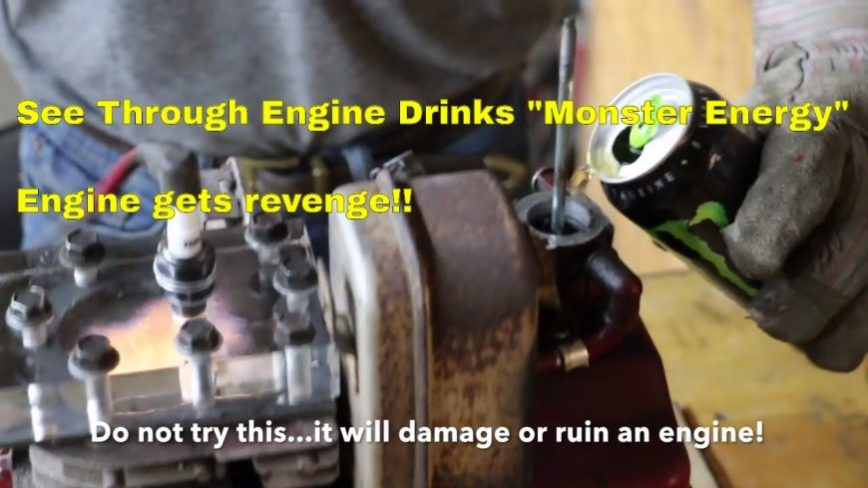