For those massive ships that fund themselves out in the open, surrounded by the seas ...

For those massive ships that fund themselves out in the open, surrounded by the seas as they deliver your goods, it’s not exactly like the crew aboard these vessels can always perfectly predict the weather and when the weather comes, there’s no avoiding it sometimes. After all, you can’t go inside and pretend that the rain doesn’t exist when you’re completely surrounded by water that seems to be getting more and more violent by the second. It may be terrifying, however, there isn’t much else that you can really do other than take it all head on.

In this one, we see exactly what happens when a tanker has to take on some pretty bad weather as this ship is really getting pelted with the worst of it. As the vessel crosses the water in the middle of Hurricane Lane, there’s nothing that anyone on board can really do except hold on for dear life and hope that the person in charge is doing their best job in order to keep this thing from tipping too far or being hit in such a way as to be damaged. Even from this side of the screen, it’s quite the experience that can rush upon you and have your heart beating at double its normal speed within seconds.

If you follow the video below you’ll be able to see the footage that captured the breathtaking moment of the ship rocking back and forth in the water, taking on the waves as best as it possibly could. At times, there might even be instances where your heart nearly jumps to your throat as you can almost feel yourself rising and falling on these big waves. One thing that is for sure is the fact that this had to be an ultimate adrenaline rush, however, we’re not too sure it’s a situation that many people would really opt to be in.

Couple in Small Boat Almost Get Crushed By HUGE Tanker! 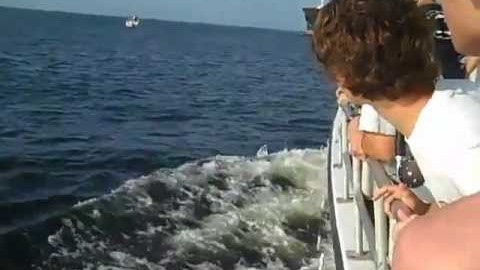