Terrifying Moment Unfolds as Highway Sign Falls Down on Minivan

Terrifying Moment Unfolds as Highway Sign Falls Down on Minivan

It’s pretty crazy how quickly things can unfold and change the entire course of ...

It’s pretty crazy how quickly things can unfold and change the entire course of your life within just a couple of seconds. Sometimes, real events might seem like more of a Hollywood movie script than real life but one can never really know when driving down highway could turn into a deadly situation. It’s probably a pretty rare occurrence but when it does unfold, it’s definitely news that grasps the masses, showing just how a freak accident might incorporate itself into real life. In this one, we confront such a situation that quite simply couldn’t be any more off-the-wall.

As a 53-year-old woman was making her way down a Tullmarine Freeway on Tuesday in Melbourne, Australia, she would eventually come head-to-head with a situation that couldn’t be prevented. There’s simply no amount of focus or driving ability that would be able to get her out of this one, even if she was as talented as Ken Block.

A trailing car’s dash cam would capture the entire scene as the minivan was prowling down the highway, when all of a sudden, a sign would fall from above. Your common freeway sign is much bigger than it looks hanging above the ground. When set on the ground, such a sign might even be a couple of stories high. Luckily, though, only minor injuries were sustained when the sign would fall into the path of the van.

The footage of the car following the incident has been released and shows the entire ordeal unfolding. You can see that video below but we have to warn you that this one might just take your breath away. After seeing this one unfold, it’s hard not to lose composure a bit but upon hearing the results, it was certainly a major sigh of relief that certainly felt great.

The Future of Jack Stands... New Design is a Life Saver! 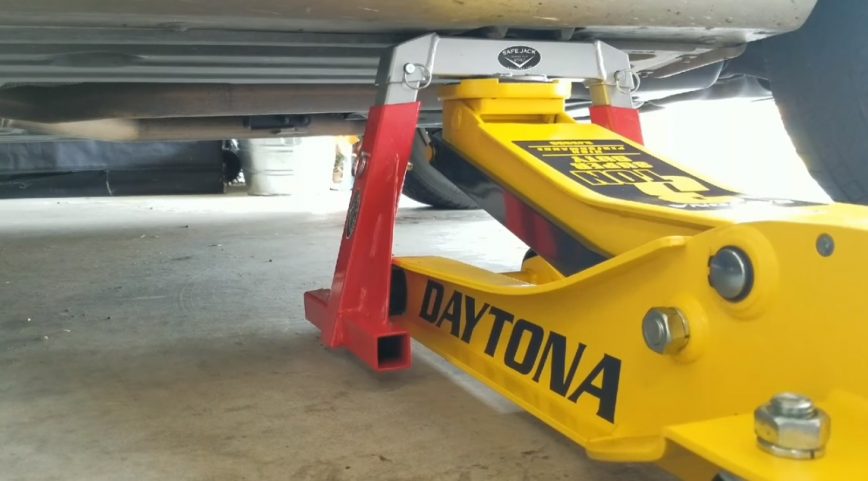