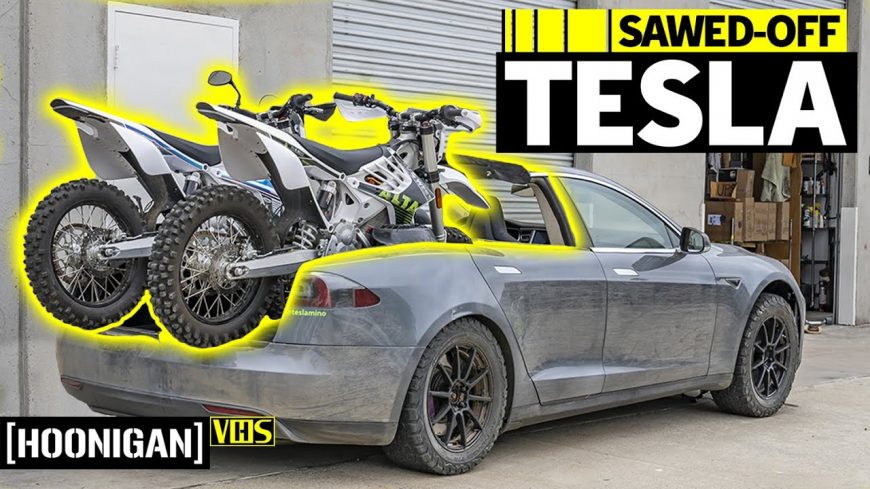 When a vehicle comes out at first, there aren’t too many modified versions of rolling around. Sometimes, the wait can be excruciating for the tinkered with toys to hit the streets.

However, after a while, no matter what the platform is or how expensive, it will eventually begin to be chopped in every way imaginable. We can’t help but love it.

There are all sorts of different examples of this. As a vehicle is on the market longer, we see several benefits for us gear heads. Not only does said platform get cheaper. In turn, eventually, more aftermarket companies will come out with parts for it. After all, the research and development phase can take quite a while

We have to say that one of the platforms that we are most excited to see modified is that of Tesla. Whether it comes in the form of a high dollar aftermarket job or somebody with a reciprocating saw and a vision, we just want to see them modded!

This time, thanks to the crew over at Hoonigan, we’re able to stop in on a custom modified Tesla, EV West. This thing really flips the script on what these machines are all about.

Naturally, when someone thinks about the Tesla brand, they probably picture a tame road machine. Every once in a while, someone might bring up the fact that Teslas have been seen conquering at the drag strip. This time, however, it’s off of the beaten path that we go as this Tesla takes us where very few if any have gone before.

Naturally, after the Truckla, others had to follow! After all, there are a lot of pickup truck fans out there and in some cases, folks might not be willing to wait for Tesla to make their very own. Instead, creativity has to take over at some point. This is that point and we would recommend grabbing some popcorn. This is a long one!

However, at the end of it all, we think that you might have a couple of crazy ideas yourself.