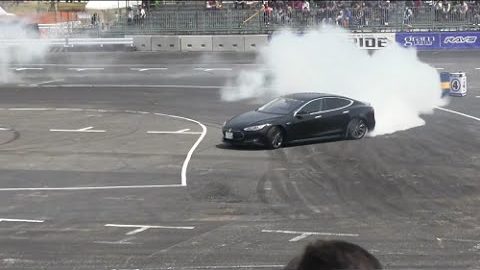 As the old saying goes, if they build it we will come. This is really something that can be applied to the automotive community in a big way. After all, it seems like anything with a set of wheels is enough for a gearhead to get excited over. Heck, we have been known to put some of the most unlikely candidates to the test in ways unlike many people would ever expect. With the help of the internet, we’re able to take these methods and share them with the world. It shows off just how crazy we can all be. We have to warn you that sometimes it gets a little out of hand.

This time, the star of the show is none other than the most popular EV on the road these days. We’re talking, of course, about the Tesla Model S. Now, outside of the vehicle’s all-wheel-drive layout, there isn’t really any good reason why this thing shouldn’t be able to effectively drift. After all, lots of instantaneous torque would likely help it to be one of the stars of sliding. Sometimes, though, while a concept might seem good in theory, it’s not exactly all that great in practice. Would drifting the Tesla play out this way?

By following along down with the clip below, we get the unique opportunity to go inside a drifting event that features one of America’s favorite electric vehicles. As if we weren’t already hyped up enough about what these things have to offer, just imagine seeing one sliding sideways with a cloud of smoke coming out behind it. It does appear as if this one has been modified just a touch. Therefore, we aren’t sure that just any old Tesla would be able to do this. A rear-wheel-drive conversion might be necessary.