He Sent it to The Max! YouTuber Sends Tesla Model X Flying

He Sent it to The Max! YouTuber Sends Tesla Model X Flying

When it comes to those who make their living on YouTube, it can be an interesting ...

When it comes to those who make their living on YouTube, it can be an interesting beast to tackle. While most folks think conventionally, those who make this sort living by broadcasting their life think a little bit differently. For example, if we look at something like a Tesla Model X, we see a relatively expensive SUV.

To an average Model X owner, their SUV might be something that they want to guard and protect. After all, such a stout investment isn’t something that most would want to waste. However, when it comes to people who broadcast their lives on YouTube, the destruction might be more than worth it. Some of these people actually stand to make money by abusing expensive things. Therefore, we see lots more chaos happening on YouTube channels than would normally happen in real life. After all, with a following like our uploader, David Dobrik, has, a single video will probably pay for a new Model X and then some.

This time, we tune into Dobrik’s channel as he gets a little bit risky with his Model X. We watch as somebody he’s hanging out with wants to jump the electric SUV. Most people in their right mind would probably turn down someone who wants to take their luxury vehicle airborne. It makes good content, though, so it probably wouldn’t make sense to turn down such an offer.

By following along with the video below, we get to see the byproduct of all these factors mashed together. At the end of the day, YouTube has really opened up some doors for us to see interactions that we wouldn’t normally be able to see. They might not be natural.

However, that’s why we tune in in the first place, right? Nobody wants to spend their time watching someone live an average life.

These speed bumps in LA are on another level pic.twitter.com/alWSHa5992 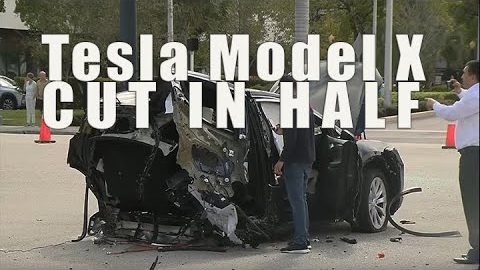