Tesla Stolen, Taken on Joyride, and Split in Half Before Batteries Explode 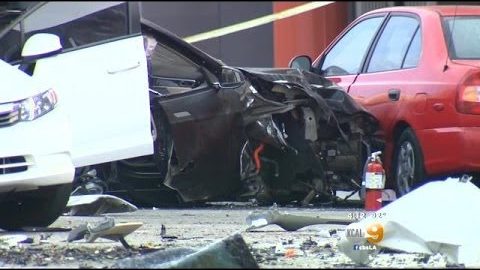 When you look at certain situations, you have to wonder what exactly was going through somebody’s mind. What makes somebody steal a vehicle and then go on to joyride through the city, putting countless peoples’ lives directly in danger with no regard for human life as they sit it aside in favor of the need for an adrenaline rush or perhaps a monetary gain through stealing the car that they thought they were going to get away with. This is when situations escalate to incredibly dangerous levels and you see the incredible fallout from such carelessness.

In this video, we catch the shocking aftermath of an incident that has the stolen Tesla rocketing through the city with two people onboard before hitting two vehicles with five people in them combined, then eventually ramming into a traffic light pole.

The Tesla was split in half in the process, managing to injure six people with one person who was thought to be dead, however, that statement had since been retracted. At the end of the day, it’s unclear if this was the intention or not but regardless, you have to look at the lack of awareness to make something like this happen.

After seeing a video like this, you can’t help but feel for the victims involved in this massive mess as some people tangled up in the whole ordeal were simply dragged into somebody else’s nonsense, all without having an opportunity to see what was coming in order to react and avoid it all.

I guess that the one bright spot in something like this is that nobody passed away, however, that isn’t to say that they were left without carnage as they had plenty of pieces to pick up, we’re sure, after such a destructive incident had taken place and fallen in their laps.