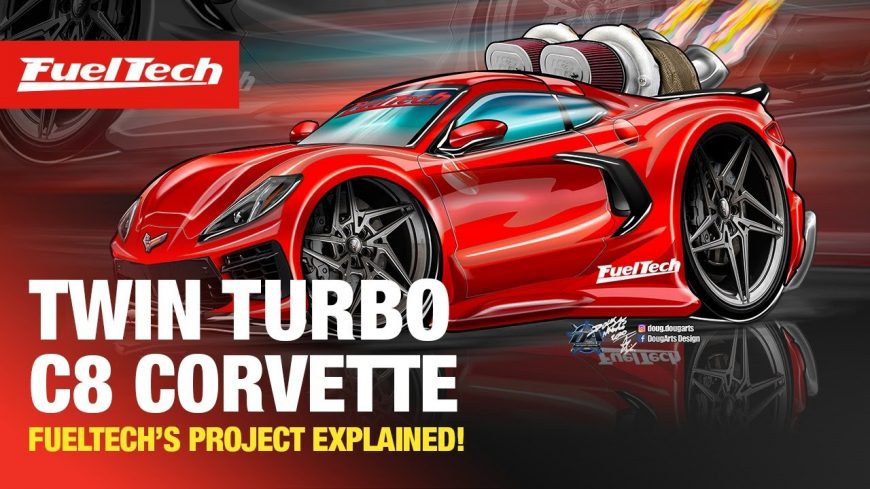 When we say the phrase, “Research and development,” it might hit the ear as something that’s boring. However, for those who work at FuelTech, a little bit of R&D seems pretty exciting. This is particularly true right now because they’re doing their research on a C8 Corvette. As one of the hottest machines on the streets, this is a car that just about every performance enthusiast wants to get behind the wheel of.

Not only are the folks at FuelTech getting the chance to tinker with the machine, naturally, but they’re also turning up the volume a little bit. A company like this isn’t just going to roll around in a stock Corvette. It kind of defeats the purpose. Instead, they have thrown a pair of turbos at the car, cranking up the power output to see what their equipment can do when paired with the Corvette architecture.

FuelTech tells us, “The Internet buzzed with excitement last month when FuelTech revealed its latest R&D project, a 2020 Corvette that produces 754whp, an output level that was held back by a slipping clutch and has the potential to top 1200whp. The multi-national technology company integrated its FT600 engine management system with the factory ECU (PCM) and TCU (Transmission Control Unit) to create a seamless solution for ultimate control over the twin-turbocharged LT2 engine combination without hacking into the factory ECU. Here is the story behind the project as FuelTech blends its championship-winning, record-setting electronic technology into the C8 Corvette.”

The video below takes the time out to explain how FuelTech has had success with a wide variety of platforms and how exactly they plan on applying that success to one of the hottest cars on the market these days.

The company says that their prior success “Prepared the company’s PowerFT engine management systems to be capable of piggybacking on to one of Chevrolet’s most advanced vehicles in its line-up. Beginning with a clean sheet of paper wasn’t easy but worth the efforts since FuelTech will be building a user-friendly plug-and-play setup for speed shops and enthusiasts.”

They continue that “FuelTech is proving it is more than just a motorsports technology company as it expands into the street market and integrates with OEM electronics.” In other words, they strive to make the world of creating power as painless as possible!