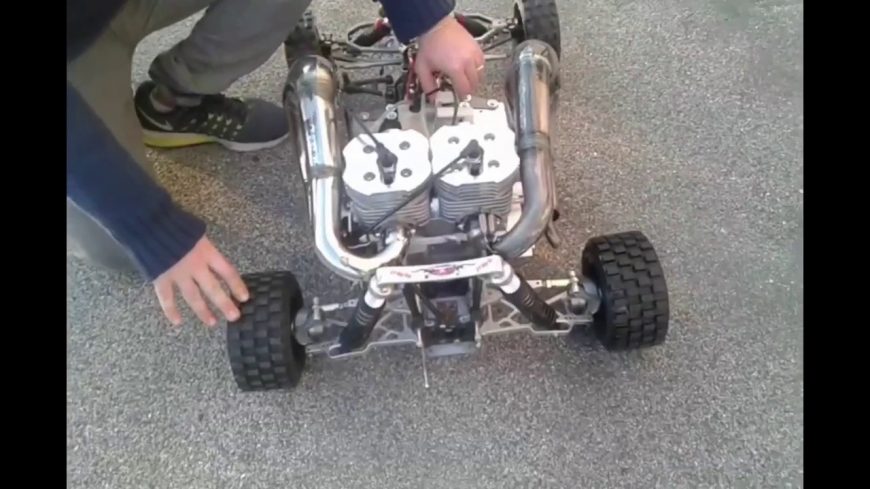 Where there’s a will, there is a way, and it looks like the will here was to create an incredibly awesome remote control machine to make people stop and stare and wonder exactly what’s going on with it. In this initial test session, we get to take a look at the beginning of what looks to be quite the wild project as a 100 cc remote control two-stroke fires up and gives us a little bit of a teaser of what’s to come with the next steps in the build. With a few blips of the throttle, you can really tell that this machine is going to be something worth watching out for!

If you take a close look at this world of remote control cars, you know that just about anything is possible as people have recreated every single real world situation that you can imagine on a shrunken down level and even some that have never been seen in the real world as they come to life on a miniature scale. With that in mind, it will be interesting to see what this thing becomes when it lives its way all the way to fruition of the creators end goal that he or she has in mind.

Check out the video down below that takes you along for a little bit of a tour of this rowdy little beast that promises to absolutely scream when it finally comes time to be under full throttle. After checking out the video below for yourself, tell us what other additions you would add to this little tiny two-stroke in order to make it come around, full circle. Thinking about how you’re going to finish up your project is one of the most exciting parts of putting something together the first place, right behind the excitement of watching it rip for the first time!