The Best Miniature Cars, Trucks and Buses With Badass Engines! 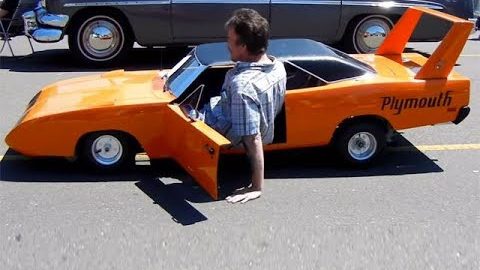 It’s no secret that we love pretty much anything with wheels here at Speed Society, and that includes these awesome miniature replica cars. Some of them have basically stock go kart style engines, but some of them sound like they have pretty gnarly motors in them that provide a lot of fun on a marginally smaller budget than their full size counterparts.

The video below is almost 8 minutes of nothing but motorized miniature rides, and features a great variety of tiny vehicles, from badass Nova drag cars to a ridiculously accurate eighteen wheeler and even a miniature school bus. There is also a very cool Army-style Jeep from Down Under that trudges dutifully through the mud just like the real thing, much to the delight of the camera man. We’re willing to bet most of these projects started life as something for the kids, but as we tend to do, it looks like the dads took over and decided to make a little something for themselves to enjoy instead.

Perhaps the coolest part of this video is just how insanely accurate some of these builds are. The eighteen wheelers look so real that it’s really hard to tell they aren’t until you see them beside something else that shows a size comparison, and there is a Porsche at the end that’s amazingly accurate as well, including having the engine in the back and a shifter between the seats. We know there are more miniatures out there, so we want to see what you guys have built, whether they be for you or your kids. Get those reproduction rides out and get some video of them in action and post them up with the Speed Society tag, if we like what we see we just might share your build here on the site for all our fans to see!