Farmtruck and AZN seem to be that one duo that’s always about having a good ...

Farmtruck and AZN seem to be that one duo that’s always about having a good time. I think they have grasped the concept that life is short and you need to make the most of every moment. When these guys get together, they’re all laughs but when it comes time to race, they definitely have the ability to swap it out and put their serious faces on for a couple of minutes and do what it takes to get prepared to rocket down the street or strip as fast as humanly possible, throwing a handful to the person in the next lane over as the dynamic duo brings out one of their sleeper machines to go head-to-head with the potentially unsuspecting competition. Even though these two sleepers have been busted by most of the community by now, it’s still a lot of fun to watch these unconventional vehicles go as fast as they possibly can.

This time, however, its full disclosure as we’re sure that both Farmtruck and AZN know a good bit about what’s under the hood of each others’ rides but instead of going out fishing, they’re going up against one another, putting the old-school Chevrolet C10 in one lane and the vicious Volkswagen Beetle in the next. This is one of those matchups that you wouldn’t really expect but since it’s happening, we can’t seem to keep our eyes off of it. Once we heard about this one going down, we instantly became incredibly curious to see what would happen when these two ended up throwing down against one another.

Follow along in the video down below as we’re taken on the scene of some no prep action as Farmtruck and AZN go head-to-head. Normally, they are in one another’s corner, but on this particular pass, they became competitors with each other for just a moment. You have to think, that after this race, they will be right back to their natural light hearted state of mind but it will most certainly come with its fair share of bragging rights!

The FULL #farmtruck vs. #dungbeetle race at Outlaw Armageddon. #farmageddon Farmtruck and AZN 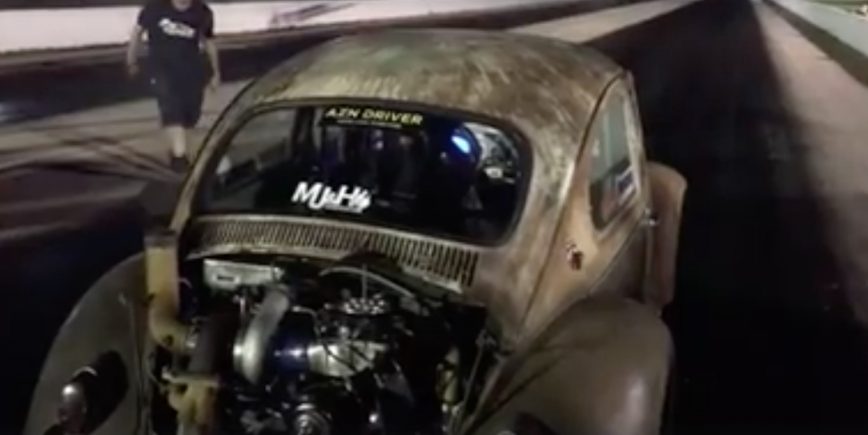