One machine that has made its fair share of noise over the past year or so is the ...

One machine that has made its fair share of noise over the past year or so is the Ford Mustang drag radial machine from the likes of Kevin Fiscus and Josh Klugger that has been seen making magic on tracks across the country.

This time, the scene for the action is the Import vs Domestic World Cup Finals at Maryland International Raceway and Fiscus is behind the wheel and ready to run this thing out the back door as the car has been consistently knocking down 5-second passes, new territory for drag radial machines.

In this BigKleib34 video, we check out the car in action as Kevin lays the hammer down and ends up going home with a stack of 5-second passes and a new record to boot as the Mustang blasted its way through the traps in just 5.94-seconds at speeds of 250mph before pumping that record just a bit further and eeking out a 5.92-second pass to top it.

The footage below shows us that the car can hit its marks consistently. Now, the only question is, will anyone be able to track down the amazing things that this car is doing on the track? If they keep wheeling like this, it’s going to be tough! 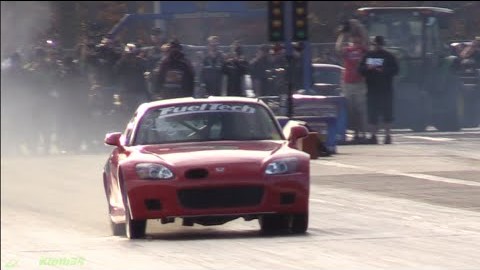