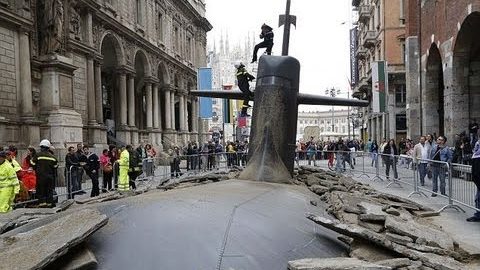 I can’t even lie, I had no idea Milan was anywhere near an open ocean or sea, but apparently there is water beneath the Italian metropolis, as a submarine recently surfaced right in the middle of the city, destroying a section of one of the streets and damaging a car parked close by.

Of course, as you might have already figured out, this was part of an elaborate publicity stunt! Set up by an insurance company, the stunt was intended to highlight the randomness of things that can happen that necessitate the need for good insurance. The ruse was pulled off amazingly well, with an incredibly lifelike submarine tower, realistic “damage” in the form of chunks of concrete, and of course, sailors. The stunt drew crowds from all over the city, which by all accounts, is exactly what a company would hope for when it decides to pull one over on a city full of potential customers.

We don’t know how many new clients signed up for submarine insurance due to this stunt, but it certainly got a ton of attention, hopefully without too much negative feedback from those who may not have been so entertained by the idea.

« Restoration of Tread on Old Tires, Is This Safe?