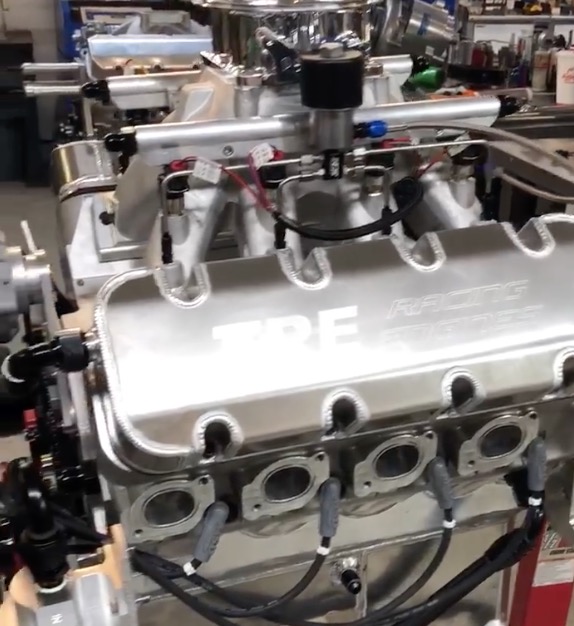 Generally speaking, especially when it comes to engine displacement, bigger is better. While it is undeniably cool to outrun a guy who has more cubic inches, there’s really no replacement for displacement.

That’s what makes this engine from TRE Racing Engines so incredibly badass. With many races holding shootouts for small block nitrous combinations only, every possible inch of displacement is an advantage over the guy in the other lane. TRE has been developing this engine for over a year because, to put it in terms most of us can understand, extracting more displacement from a stock bore space small block requires some voodoo and possibly an animal sacrifice to the racing gods.

In all seriousness, there is only so much you can do with a stock bore space engine. Without being able to spread the cylinders farther apart, you can only increase the bore so much before they literally run together, which would obviously render the bottom end unusable. Without being able to see the cylinder to know for sure, I’m going to assume that TRE sleeved their aluminum block and bored it as large as they feel is possible without compromising the durability of the cylinder walls.

That leaves only one way to add displacement: a longer stroke. Of course, you will face the same issues with increasing the throw of the crank as well; eventually, you start running into stuff. There’s only so much room between the oil pan rails in the bottom of an engine, and even if you clearance them, that only adds fractions of an inch to the stroke. So what TRE has done is spent as much time as it took to reach the maximum bore and stroke, which equates to a final displacement of 511 cubic inches, larger than any factory-installed big block Chevrolet ever produced as far as I know.

Horsepower numbers have not been revealed, and may never be, since the nitrous small block world is a clocks-off niche where the players keep their cards hidden as much as possible. Either way, you can bet many of the big names in that class will be filling out order forms for these in short order.

It’s here! After over a year of development the biggest baddest stock bore space small block Chevy is done, tested and ready for the racetrack. We spent a lot of time developing this combo specifically for our small block nitrous customers, our own proprietary in-house cylinder head, billet block, billet crank, 511 cubic inch monster motor!

« $100+ Million Dollar Recall! If You Own This Tool From Harbor Freight You Might Be In For a Surprise!