When a competitor starts going off of the ground in a traditional no prep drag race, ...

When a competitor starts going off of the ground in a traditional no prep drag race, you may just have something special on your hands.

Let’s be honest, nobody in attendance here is going home without an insane story to tell because they are all going to be talking about this at work on Monday morning around the watercooler if not for a couple of Monday mornings to come.

NXGonzo Video was on the scene at Outlaw Armageddon to check out The Mutt, a classic pickup truck equipped with “a surprise” under the hood as it takes on Tha Kracker, another truck that’s equipped with a sniffle of nitrous via Nitrous Express.

To say that this old school pickup is a wild ride would be an insane understatement and we’re about to show you exactly why that is.

When the throttle drops, we watch as the truck lifts the front wheels way up in the air and veers out of its lane into the opponent’s lane of travel.

Thankfully, both drivers were able to avoid a collision because at the end of the day, nobody would even wish something like that on their worst enemy. However, the Mutt might need a couple of repairs after all of that air! 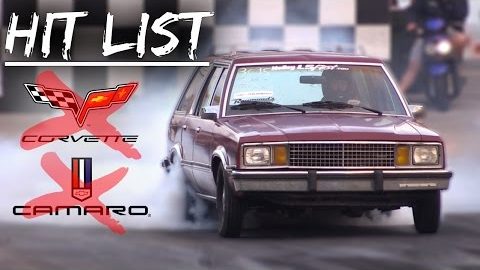