The NASCAR Hall Of Fame in Charlotte gets looted and vandalized in overnight violent protests.

The NASCAR Hall Of Fame in Charlotte gets looted and vandalized in overnight violent protests.

If there’s one thing that never really made sense to yours truly and many ...

If there’s one thing that never really made sense to yours truly and many like-minded individuals, it’s the thinking process that somehow links destroying your own community to social change.

Sure, if you’re standing behind a cause that you think is noble and needs attention and change to be brought about, then by all means, go out there and fight for what you believe in, but leveling your own community and the attractions that bring revenue to keep your city in good health doesn’t seem like the smartest way to go about it.

In Charlotte, as you’ve probably already heard, that was the course of action as yet another police and civilian relation issue unfolded and people took to the streets to attempt to make their concerns known by trashing the NASCAR Hall of Fame.

On Thursday morning, a street sign hung like a spear from the front window of the hall’s news center, after vandals tried prying out one of the front windows. Windows in the lobby of the adjacent NASCAR Tower were busted out, as were windows at nearby restaurants and two hotels. –Mark Price (The Charlotte Observer)

The Charlotte Observer reports that smashed windows and vandalism to the building were the extent of the damage to the Hall as protesters failed to get in, but the Buffalo Wild Wings building at the corner of the hall building were another story as looters and protesters smashed their way in to do as much damage as possible, smashing bottles and scattering furniture about.

Further reports say that the entire city was hit with looters and vandalism, but majority of the damage happened at the EpiCentre entertainment complex. Cleanup crews are already out and about and most of the city has been reopened, but reckless acts like this lead you to wonder where exactly this all will stop.

Trump Supporter Does Donuts Around Anti-Trump Protesters In California 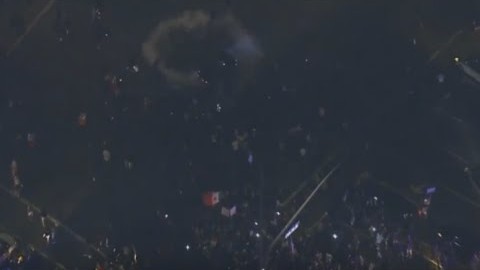