When it comes to realistic racing games, the team at Turn 10 raises the bar ...

When it comes to realistic racing games, the team at Turn 10 raises the bar constantly with each new release in the Forza series. Originally an answer to PlayStation’s Gran Turismo, the Microsoft exclusive Forza series has taken on a life of its own, boasting over 4 million active online players and featuring some of the most amazing graphics and driving physics we’ve ever seen.

This week, during the E3 Electronics Industry Conference in Los Angeles, Microsoft revealed the trailer for the latest release in the series, Forza 7. The cover of the game was awarded to the 2018 Porsche 911 GT2 RS, which was also revealed for the first time at the conference, and the trailer is absolutely gorgeous. Running in 4K UHD, the game is nothing short of insane, which is obvious if you look closely as the gameplay footage plays. Dynamic weather, detailed vehicle damage, and carefully-reproduced vehicle appearance and physics combine to create the most realistic racing experience ever.

Look for Forza 7 to hit store shelves in November. Some retailers often offer bonuses for customers who preorder, such as posters and in-game content. We certainly can’t wait to get our hands on a copy to play here in the office! 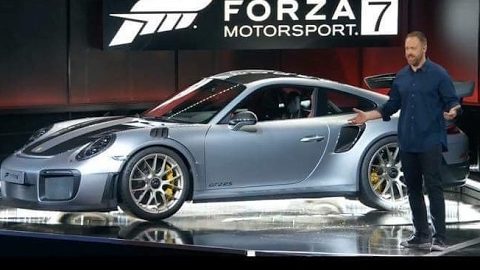