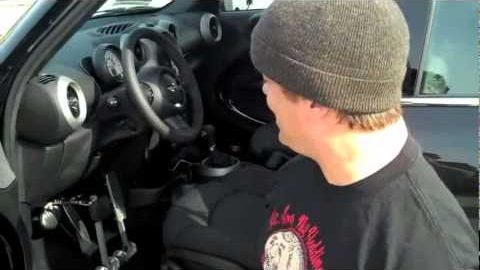 As you have seen with the sensational saga that has unfolded in the Jackass entertainment series, Wee Man has not let his status as a little person get in his way of being successful. Instead, he managed to figure out a way to truck right on through it and become an entertainment sensation.

Now, I’m not saying that because he’s a little person that he is somewhat further along than he might be if he wasn’t but he certainly isn’t letting it get him down, even off of the screen. This time, he shows us some measures that he’s put in place to show us how he transformed his driving situation so that he would be able to drive a regular old Mini Cooper.

Thanks to the folks over at Mini Cooper, Wee Man has been able to modify his Cooper S to accommodate his inability to reach the pedals in a traditional car. With some simple pedal extensions that snap in and out of place when he wants to drive it or allow someone else to drive it, he’s on his way with just a couple of steps.

Check out the video down below as this Mini Cooper has been converted to become quite the versatile machine that meets all of Wee Man’s needs. This is really an innovative way to make sure that this car retains all of its original usefulness while also accommodating its new driver!

« Chevy Silverado With Beefed Up Duramax Tries to Break 2,000hp on the Dyno!