The Original Kings of Roaling Coal! 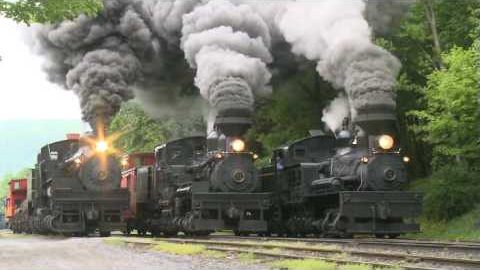 Over a century and a half ago, long before annoying kids in diesel trucks learned to roll coal from their exhaust, there were Shay locomotives that did so in much more spectacular fashion. But when these gorgeous old trains pumped out huge plumes of smoke, it was to move people or freight from station to station, helping build our nation and help towns and cities grow from coast to coast.

The Shay locomotive was the most widely used geared steam engine locomotive, developed by school teacher, clerk, logger, merchant, railway owner and inventor Ephraim Shay in the late 1800’s to help move logs to the mill more easily that using sleds. His earliest known train-type invention was a tramway that allowed him to log year round, giving him a distinct advantage over his competitors in the logging industry. A few years later, the first Shay locomotive came to be when Ephraim built an engine on a flat car with a boiler and gears to power the wheels. The front wheels were built on a pivot, but the rear wheels were fixed to keep everything aligned for power delivery.

As is always the case, technology allowed the simple two-cylinder engine-powered design to grow and evolve to the more advanced designs seen in the clip below. These engines have been meticulously restored to their former glory and look just like they would have back in their heyday, rolling out huge plumes of black smoke and sending another shot higher in the air when the conductor pulls on that distinct wailing horn.

Trains have since evolved into diesel powerhouses that move far more tonnage and much more efficient numbers than any Shay locomotive ever would, but they can’t match the beauty and class of these old engines. As your dad has probably said 1,000 times, they just don’t make them like they used to.