If you’ve never seen Barbie Jeep racing then you’re in for a real treat ...

If you’ve never seen Barbie Jeep racing then you’re in for a real treat and when you combine it with the coverage that our friends over at Triple-X Motorsports and Outdoors were able to collect and expertly edit, you’re in for a real experience that might be one of your new favorites. This time, we get to approach the wonderful world of Barbie Jeep racing once again at the event the goes by the name of “Rednecks with Paychecks.” Spoiler alert, it’s going to be a ton of fun with a bunch of people who are all riled up and ready to go at it.

To get things started, instead of popping right into the action, we get a little bit of the background first as the cameras of Triple-X are rolling while talking a some of the drivers of this race about what their winning strategy might be. If you’ve ever watched a Barbie Jeep race, you know that these things can get pretty crazy with parts flying everywhere as the min vehicles end up scattering sometimes and not holding up to the rough terrain along with sending riders into the air as it ends up being pretty tough to hang on for dear life when these things are really putting together heads of steam in the fierce competitive atmosphere.

If you follow along with the video below, you get a thorough entertainment experience that takes you along for the ride, putting you in the driver seat getting familiar with all the people who are crazy enough to throw themselves into a race like this. You have absolutely got to love the dedication that these guys show as they’re willing to put themselves in harm’s way for the taste of victory and the name of putting on a show alike. After seeing this crazy action for yourself, be sure to tell us if you would be willing to hop into one of these things and go for a spin.

Downhill Barbie Jeep Race Gets too Intense, These People are Nuts 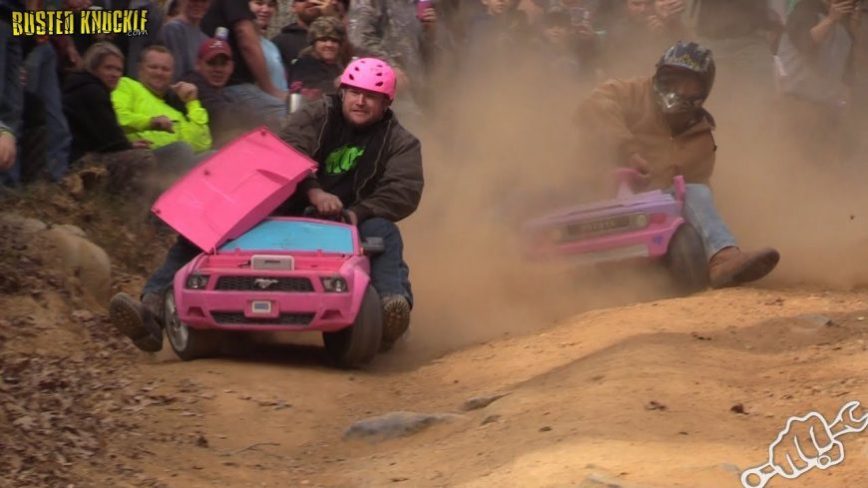