The Ultimate Off-Road Showdown! Can Am VS Ram TRX

The Ultimate Off-Road Showdown! Can Am VS Ram TRX

When it comes to playing off of the beaten path, there are a lot of options to choose ...

When it comes to playing off of the beaten path, there are a lot of options to choose from. Let’s just say that a rather large amount of money is spent when it comes to vehicles that can take us anywhere. With that in mind, we find ourselves feeling like kids in a candy shop. Picking out just the right ride really depends on what the goal is, though, and how much money you’re willing to spend. At the end of the day, with enough of a bank account, anything is possible!

This time, the crew over at The Fast Lane takes the liberty Tof digging into a couple of popular off-road options. Naturally, when taking a look at two vehicles like the 2021 Ram TRX and Can-Am Maverick X3 Turbo RR, they have a couple of different functions. In fact, these vehicles really don’t relate to each other in very many ways aside from their capability of going off of the beaten path.

Needless to say, though, when we heard about the idea that TFL was going to compare them in a race, we couldn’t help but be interested in seeing who would come out on top. When it comes to the Can-Am, the machine is built to perform off of the beaten path. Sure, it could be used for utility but the main idea behind it is going quickly where the conditions might not exactly be too friendly. Throw in the fact that it’s much lighter than a full-size pickup truck and we could see how it might end up being surprisingly quick in this comparison.

On the other hand, though, it’s going to be hard to compete with over 700 hp that we find under the hood of the Ram TRX. As one of the most exciting and powerful pickup trucks on the market, the TRX certainly packs a heavy punch so it wouldn’t be a stretch of the imagination to think that a side-by-side could come anywhere near competing with the truck unless said side-by-side was heavily modified.

By following along with the video below, though, we find that looks can be deceiving and that this actually ends up being quite a tight battle!

How Does The Ram TRX Supertruck Handle The Snow? 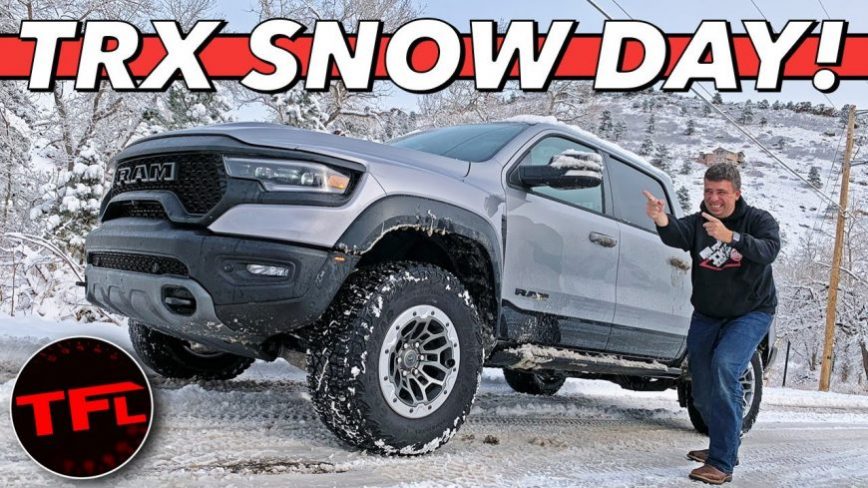