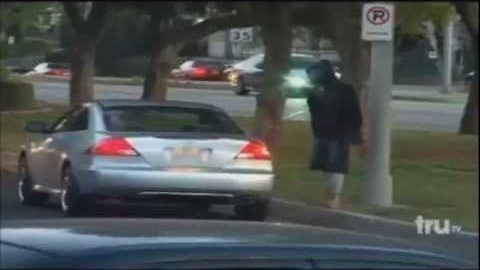 If you’ve never seen the show, “Bait Car,” we would highly recommend checking it out sometime if you should ever catch it on television. The premise is pretty simple. Basically, police set up the situation where they send an easy-to-steal car into an area that is very well known for its problem with car thieves. From there, the unsuspecting, or this time, suspecting thief wanders their way into the grasp of the law as the criminal will attempt to steal the car that us being monitored by the police and ready to be shut off at a moment’s notice when they see the car making its way away. Simultaneously, the doors will lock and trap the thief inside.

In this one, as we briefly referred to, the criminal here isn’t all that unsuspecting but instead, knows exactly what’s happening. As he gets in the car, he keeps mentioning the fact that he knows that it’s a bait car and even keeps the door open for the moment that it’s locked down. I’m not really sure why somebody would put themselves in a situation like this where they’re doing something incredibly illegal right in front of police but, I guess that at the end of the day, not everybody ends up thinking the same way. In fact, we would go as far as saying that this guy doesn’t really think like most average people would.

Follow along in the video below that has this man stealing the bait car that he says that he knew all about. I’m not sure if he was being honest or just kind of had a hunch and attempted to go for it anyway. However, when he was asked why he decided to steal the car if he knew about it, he refers to the idea that maybe he just felt like being famous. I guess that’s a heck of a way to make your claim to fame but, maybe in his group of peers, doing something like this would help him climb his way up the ranks. After following along with this video, be sure to tell us why you think he went out there and stole a car that he says he knew was being watched.