A police chase ended in Detroit following a situation where thieves stole a brand ...

A police chase ended in Detroit following a situation where thieves stole a brand spanking new Chevrolet Corvette from a car dealership.

I’m certainly no expert on stealing cars. However, we would think that if somebody wanted to get away with a crime, they probably wouldn’t target about the flashiest vehicle that one would see rolling around in the city of Detroit.

With the Chevrolet Corvette switching things up and it’s pushing the engine from the front of the vehicle to the middle, this thing looks more like a supercar than ever. We could see how the untrained eye might even mistake the car for something like a Ferrari or Lamborghini. In other words, it doesn’t seem to be the optimal vehicle to steal for someone who wants to slide under the radar.

Even though the machine is sure to stand out on the streets, that wouldn’t stop a couple of crooks from trying to make off with one from a Detroit car dealership. However, apparently, these guys took “drive it like you stole it” a little bit too literally as they would end up wrecking the car before they could get away. Perhaps the power of the Corvette was just a bit much to handle under such a wild circumstance.

In the process of trying to escape with the brand new Corvette, the driver would end up getting in quite the tangle that actually ended up destroying the car pretty substantially. We had to do a little bit of squinting to make out that it was, in fact, the Corvette that we thought it was.

After the wreck, the man behind the wheel would attempt to escape on foot. However, it wouldn’t be too long before police could catch back up with their man and ended up making the arrest.

9 Second Corvette Z06 Crashes at Car Show While Showing Off! 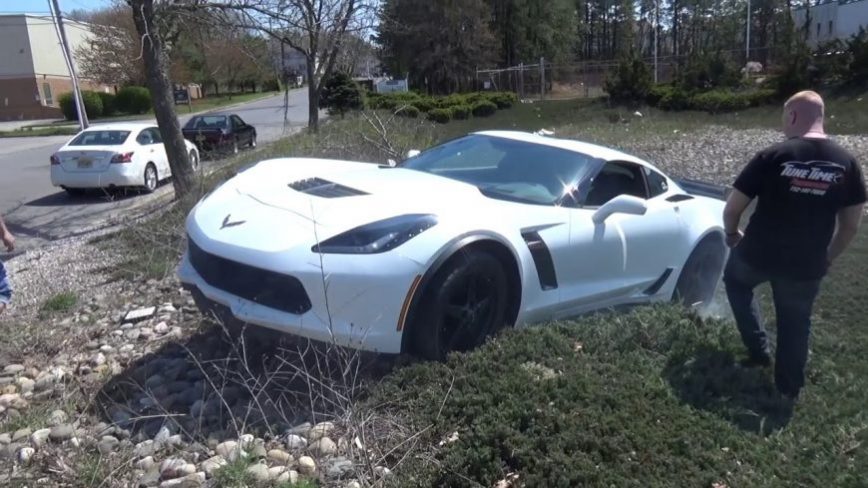