Technology improving is obviously one of the cornerstones of our society. As it gets ...

Technology improving is obviously one of the cornerstones of our society. As it gets better, we see all sorts of different areas of life growing. This means that we can do things from performing medical procedures better all the way to driving more conveniently. However, as this same tech continues to improve, there’s certainly going to be a learning curve here and there.

For every step that we take in a positive direction, there’s going to be somebody looking to take advantage. After all, not everybody has a hard-working mentality in their mind. Instead, many are looking to make a quick buck, even if it comes at the expense of someone else.

For these particular thieves, we see just that. Apparently, these guys have cracked the code on the Tesla shown in the video. By the looks of things, It seems as if these individuals have come up with a way to hack the Tesla’s wireless key. We can’t be entirely sure but it appears as if a homemade antenna was used to extend the range on the key and get the car started. It would basically trick the car into thinking that the key was nearby.

The entire video spans less than a minute. Within that timeframe, the thieves are able to get into the car, get it started, and drive away. Now, we aren’t quite sure how far they would be able to make it with the machine without the key being onboard. However, something like a conveniently placed trailer around the corner would probably solve that problem for them pretty quickly.

In a day and age where everything is evolving so rapidly, we’re sure that there will be a solution for this issue before long. However, it is pretty scary to think that someone could just come along and steal a car without even having to break into it.

Currently, there are two ways to stop hackers from entering a vehicle in this manner. The first is by using the feature in the car that requires a pin number to drive. The second would entail purchasing a signal blocking box to store the key in. 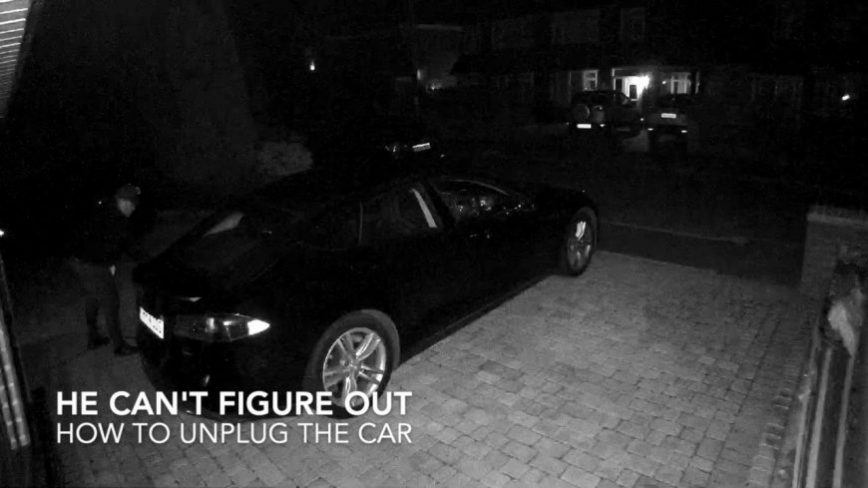